I left Parkersburg at 6:00 AM with a full day's agenda ahead of me.

The day would begin with a tree planting on the EXTREME headwaters of Big Run. I would follow that with a committee meeting of TU's Potomac Headwaters Initiative at Spruce Knob's Mountain Institute. I would wrap up the day with dinner at the Marlinton Opera House and a presentation on Marcellus Shale Drilling.

It hasn't rained to amount to anything in nearly two months, but it sure did this day. I am by no means complaining - we need rain!

We had five other folks show for the tree planting so we got 150 silky willows planted in the high meadow. 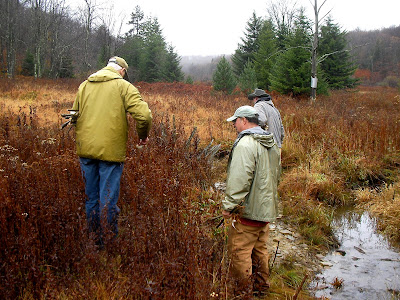 From the tree planting it was down over the east side of Spruce Knob to the Mountain Institute. I have been past this complex a few times, but never on it. What an incredible place!

We held our meeting in a Mongolian style yurt. It was a very unique structure with a great view of a high meadow. I believe I could get used to that place in a very short time.

Following this meeting, it was down off the mountain with a destination of Marlinton. The dinner was nice and the meeting was very educational but the lack of information the WV DEP has on this new technique concerns me. It concerns me because they continue to grant permits.

I finally made it home about 2:00 AM - a 20-hour day! I didn't take many photos but I did meet some new folks and I am beginning to start the networking needed for my new position of chairman of the WV Council of Trout Unlimited.

A Wonderful Fall Weekend in WV

After a very challenging week at work (who is going survive these challenging economic times?), I needed an escape to re-charge my batteries.

The original plan was to assist my Trout Unlimited chapter with the West Fork of the Greenbrier stocking then do a little brookie exploring with my camera. The West Fork in this area is a beautiful low gradient stream that meanders through a high meadow.

It was a beautiful early fall morning with a nice nip to the morning air. 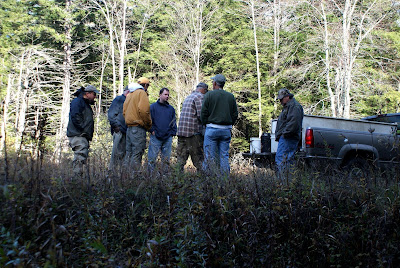 I was, apparently, a couple weeks behind the peak of the fall colors, but there would still be plenty of colors. 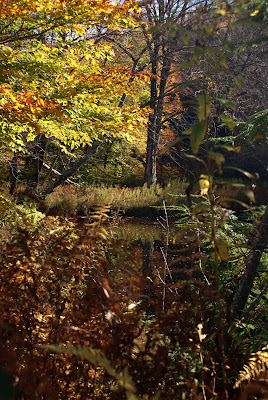 We met the head of the WV DNR coldwater fisheries at the Wildell trail head on the West Fork Rails to Trails with a truckload of nice 6" brown trout destined for their new home.

After we travelled a few miles down the trail, we turned around and starting finding these guys a new home. These weren't your average fingerlings! 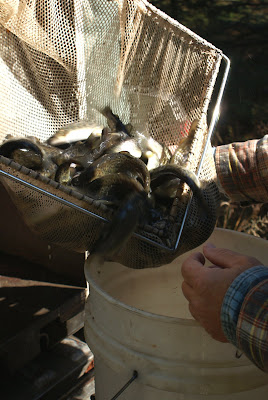 A few members of the crew scouting out the next location: 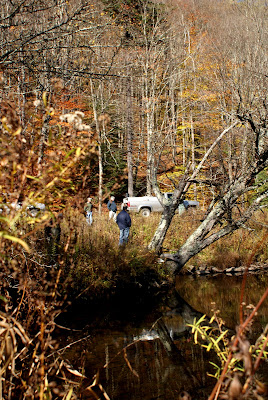 This converted railroad (the remnants of the early 20th century logging industry) has several old bridges along its length. Below are a couple of the bridges we encountered during the stocking: 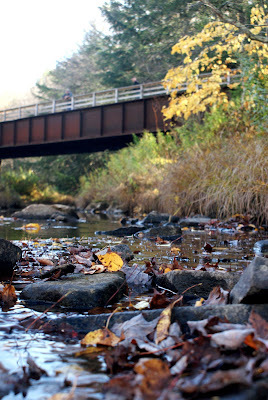 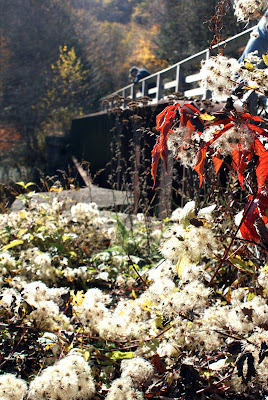 After nearly three hours on the bucket brigade, including one close call by yours truly, we wrapped up the stocking at one last good looking spot. 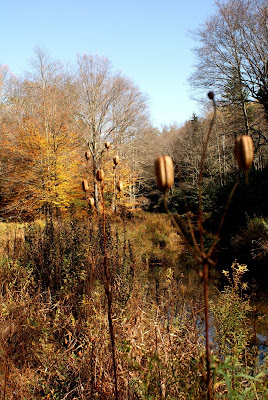 These are a few of the little guys in their new home: 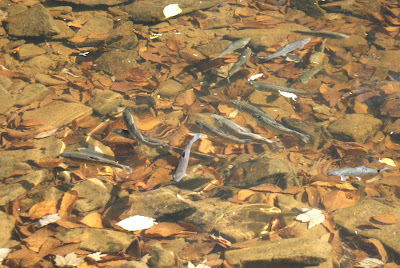 After a quick lunch at the trail head, it was the decision of where to go next. I had originally planned to explore some new water, so I pulled out the gazetteer and picked a new brookie stream I recently was made aware of.

A short half-hour car ride and I was at the destination. I wasn't sure if the fall spawn had finished up, so I left my rod in the car and opted for the camera instead.

This nice looking hole yielded a decent brookie to one of my young friends: 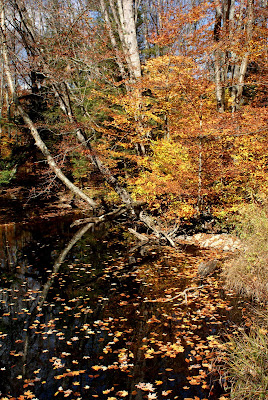 With the extremely low water and the leaf litter it was difficult to locate many brookies. I saw two and the attempt to capture them on photo went unsuccessful. I'll add this stream to my list and revisit during normal flows.

From here, it was back to the hard top and an hour drive to a familiar stream where I had multiple reports of brook trout in the 14" to 16" class.

Again, I had only planned to use my camera to capture these guys. The first pullover resulted in a couple of desirable results: I captured a pair of brookies in one small pool and snapped some good shots in another larger hole that had SEVERAL fish in it. 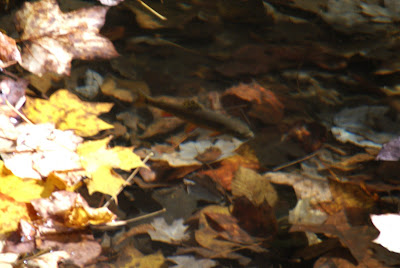 After accomplishing what I had intended with both video and still, I couldn't stand it any longer and went back to the vehicle for a rod. I hadn't fished or caught a fish since returning from Colorado Labor Day weekend, so it was time.

I caught this beauty in the first hole: 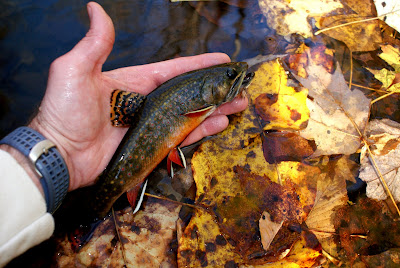 The water was flowing better than I expected, considering the lack of rain and the flow at the previous stream. I decided to push on up stream, fishing through the leaves made for quite a challenge. If you could get the fly to the water, chances were pretty good you would pick up something.

I caught several in the 3" to 4" class, saw some that would have been pushing 12", but did not see the big boys I was hoping to. 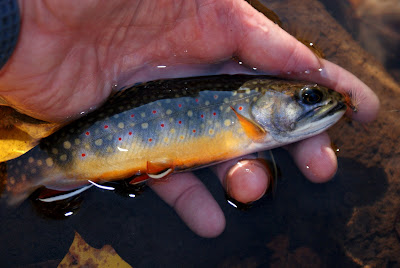 I think this guy was part snake: 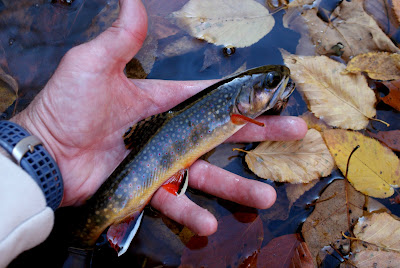 It started getting darker between the steep slopes that hold this stream, so I decided to call it a day.

When I arrived back to the car, I ran into this group of students from WVU. They were doing an electro-shocking survey. 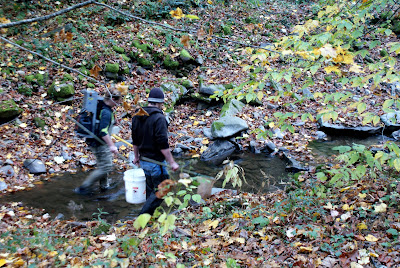 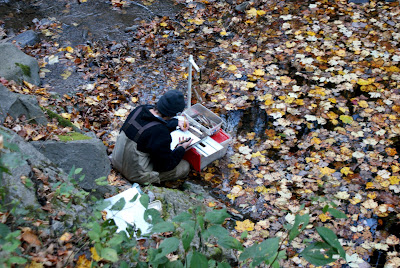 Our chapter had rented the DNR cabin for the weekend, so I decided to take the scenic route to the cabin. I have to say Route 28 along the North Fork of the South Branch of the Potomac is one of the most beautiful drives in this great state. 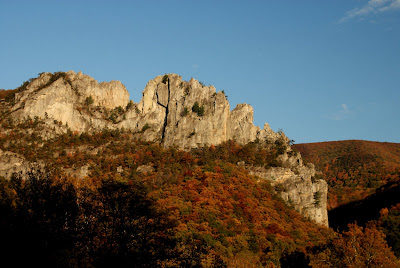 Once back at the cabin, it was a great evening with good friends. While it got below 30 degrees outside, the upper bunk in the cabin had to have been over 90 degrees. WHEW!

The next morning before I left, I got up to check out the stream that runs through the camp. I found this little rainbow that was out of place in this trickle of a brookie stream. 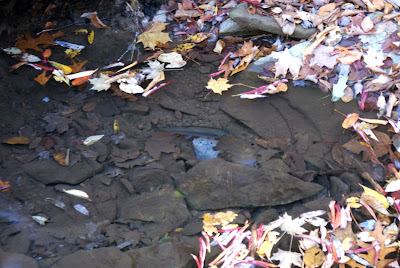 I decided to hit another new stream on the way home, a stream one of my fellow TU'ers hit the previous evening with success.

I decided to leave the rod in the vehicle again and just do a little exploring with the cameras again. This will be another stream I hit next year when the water levels are more desirable.

How many brookies do you see in this hole?

Overall, I was pleasantly surprised at the water levels in some of the streams. I had been checking the USGS gauges over the last month and was expecting the worst. When I saw water in the West Fork and decent water in a couple of the brookie streams I was pleasantly surprised.
The cool nights are keeping the water temps down now but the pools make predation a definite threat.
It was also very nice to get away from the Rat Race for a weekend too!
Chris