Every year my WVU professor friend (Rick) and I try to coordinate a backcountry day trip. This wouldbe the fourth consecutive year, with the first two being in the Seneca Backcountry. Lat year's rain and high water forced us into a different watershed - he really liked it, so this year we would return. We were also able to get our good friend (Phil, bamboo rod maker and current West Virginia Council of Trout Unlimited chaiman) to join us. I hadall of the makings f an outstanding day trip!

My alarm went off at 2:30 AM and 3.5 hours later I was at the trailhead with my friends. The plan was to hike about a mile up the trail, to the mouth of another very nice brookie stream, start fishing from there and fish our way well into Virginia.
By 6:30 AM we were headed up the trail. The forecast was for mid-80s, but the early morning temperature was in the low 40s and it would be hours before the sun would reach the water in this deep valley.

There was very good conversation on the hike in regarding the controversy a couple of individuals in TU "National" created on this stream last year. I won't go into details except to say the actions of these individuals cost TU several members and caused me MANY hours of public relations work as the WVCTU State Chairman at the time.

We soon reached the mouth of the feeder stream, so I rigged up my 000wt with my favorite prospecting fly; a mini-hopper from Ben at Arizona Wanderings.

The air was a bit chilly and when I stepped in the water (wet wading) I discovered it to be a bit cooler than the air. Regardless, the first run produced my first brookie of the day....it's going to be a good day! 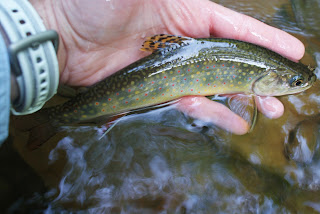 With three people fishing a small stream you can cover a lot of water. You can also slow down, admire the scenery, and enjoy watching friends work the water. Here Rick works a nice, deep pool with one of his deadly rubber-legged woolybuggers. 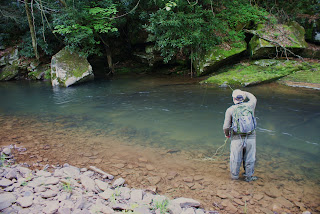 We each took turns fishing the nice runs and deep pools, with each picking up the occasional nice brookie. The mini-hopper was working well that early morning. 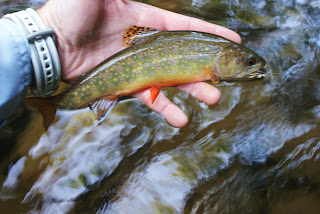 Phil is not only a fine bamboo rodmaker but he is also an incredible photographer! I think one of his secrets are the angles he uses. Here he shoots a nice brookie "blind", without using a viewfinder of any kind. He posted several of his photos from this day on his Facebook page. I'm not sure of his privacy settings, but you may be able to view his shots at this link. 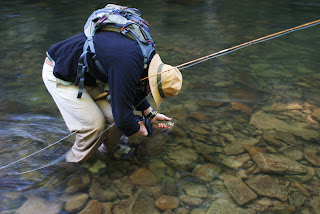 Another talent of Phil is cinematography. He has made two videos for trout and coldwater conservation:
Vandalia Angler
Vandalia Angler 2: Backing the Brookie
Phil brought his video camera with him on this day and he took several clips. I can't wait to see Vandalia Angler 3! Phil at work, filming Rick working another nice run. 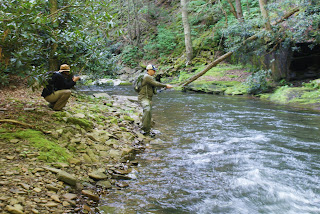 It would be a couple of hours before the sun started hitting the water deep in this valley. As the sun starte peeking through the trees, it made for some very nice shots, and reminded me of one of my favorite narratives.
But when I am alone in the half light of the canyon all existence seems to fade to a being with my soul and memories. And the sounds of the Big Black Foot River and a four count rhythm and the hope that a fish will rise. Eventually, all things merge into one, and a river runs through it. The river was cut by the world's great flood and runs over rocks from the basement of time. On some of the rocks are timeless raindrops. Under the rocks are the words, and some of the words are theirs. I am haunted by waters.....A River Runs Through It 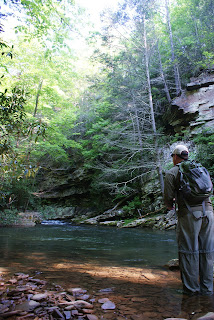 I don't kow of very many streams where you can fish across a state line. 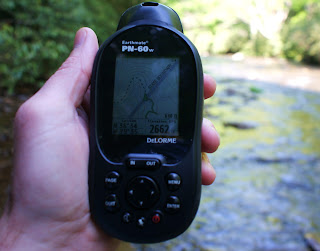 As the sun continued to rise, it made for some interesting shadows. Rick was fishing from the shadows while Phil was capturing it on video. 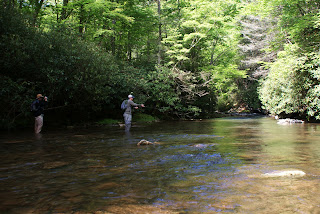 Phil would put the cameras down from time to time and take his turn fishing this outstanding stream... 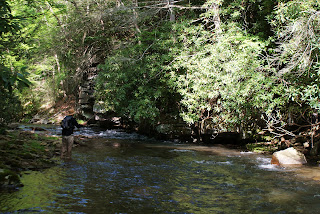 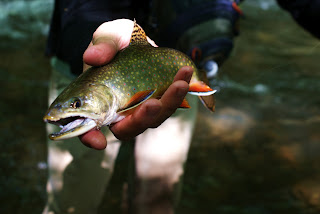 The air and water temperatures were rising but some of the deeper canyon sections had still yet to see the sunlight. Not a good time (or place) for Rick to take a swim - note he is wet from the waist down. :) 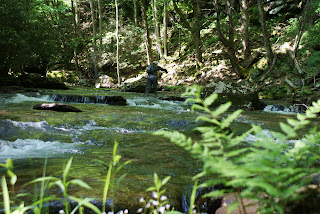 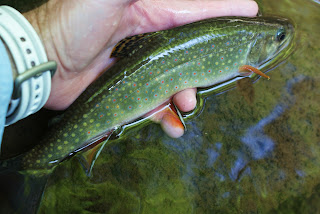 Occasionally we would find stretches of water in the direct sun and the resident brookies were very active in these sections. Rick and I both picked up brookies under the overhanging rhododendron. 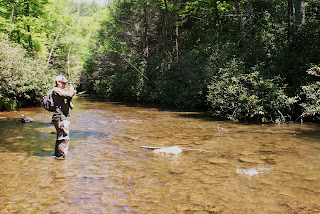 This stream has very good bug life and the bugs were coming off all day. There were caddis, yellow sallies, midges, and a few different species of mayfly...including the very large eastern green drakes. The green drakes looked like small helicopters coming down the stream and there were also a few coffin flies around.
I dug deep into my pack and found an old match the hatch fly box. Phil tied on a green drake dun and I tied on a coffin fly pattern. I picked up 5-6 brookies on the coffin fly - brookies on a coffin fly was a first for me.
This guy came completely out of the water twice, from a back eddy at the head of a very nice pool, before I finally landed him. 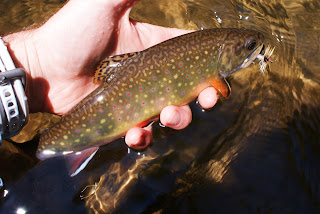 I thought, being deep into the Virginia backcountry, we would be alone on the stream. I was wrong and in the early afternoon we ran into a father and son that had made there way into the stream from a spur trail further upstream.
Having spent nearly eight hours on the water and having a 3+ mile hike out, we decided to call it a day - a ver successful day on the stream with two very good friends. It's not every day you can catch brook trout in two different states but in the same stream.
It was approximatly a 90 minute hike out and Rick had supplies ready for the tailgate when we made it out. It was very nice relaxing on the tailgate, hanging out with my friends, but we had other engagements for the evening. It was also the weekend of the Blennerhassett chapter spring campout, the WVCTU fly fishing school, and the WVCTU Spring State Council meeting - all at Thornwood Science Camp.
I really enjoy sitting around a campfire with good friends, but having been up since 2:45 AM, I was in my bunk by 9:30.
The next morning it was breakfast and a quick 1.5 mile hike into a trib of the stream we had fished the day before. The State Council meeting started at 10:00 AM, so I hike downhill for 30 minutes, prospected for 10, then hiked back out.
However, I was able to add another stream to my personal list of brook trout streams. 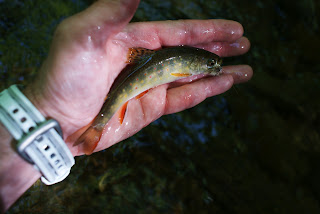 I would have loved to have stayed for the entire weekend, but I had commitements at home. Until next time...my next entry should be Brookiebum 2012 - Shenandoah National Park.
Chris
Posted by Chris S. at 1:39 PM 1 comment: