Yellowstone National Park, the nation's first national park and home to some of the world's most acclaimed wild trout fisheries, has developed a draft plan and environmental analysis addressing future protection and restoration of the park's native trout, including Yellowstone cutthroat trout, Westslope cutthroat trout and fluvial Arctic grayling. 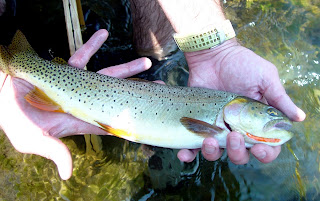 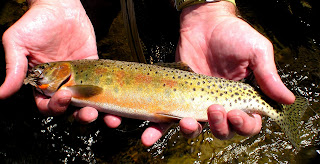 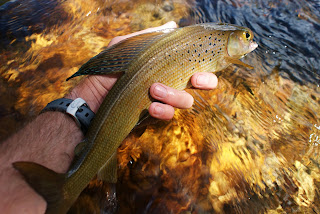 The documents can be found at the following link:

The plan calls for drastic measures (rotenone) but declining populations of native salmonids in the park explain the drastic times we now find for ourselves. 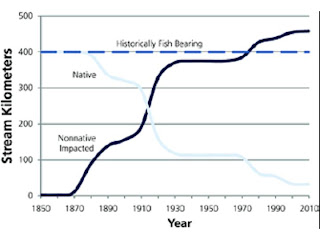 The primary focus of the plan will be eliminating the lake trout from Yellowstone Lake, but there are also several smaller projects to restore westslope cutthroat and grayling to park waters. I have pulled some of the specific projects from the plan:
G.2.2.1. De Lacy Creek
Brook trout are proposed to be removed from De Lacy Creek with the use of piscicides, followed by a YCT restocking effort.


G.2.2.3. Gibbon River (upper)
Non-natives such as BKT, BNT, and RBT are proposed to be removed in this section of river upstream of Gibbon Falls by piscicides followed by the restocking of AGY &WCT.


G.2.2.4. Goose Lake Chain
This project would remove RBT that were previously stocked in this historically fishless lake. The proposed project would utilize piscicide to remove the RBT from the Goose Lake chain, including all streams between the lakes, and replace them with a self-sustaining population of WCT.


G.2.2.5. Pocket Lake
Pocket Lake is proposed for removal of BKT by use of piscicide followed by a restocking of YCT. Not only would the entire area of the lake be treated, but the upstream tributary and downstream to the lower waterfall would be treated as well.


G.2.2.6. Clear Creek
For more than 50 years information concerning spawning YCT from YSL was collected at a weir on Clear Creek. The weir was located approximately 250 meters upstream of the confluence with YSL. In 2008, high water damaged the existing weir, rendering it inoperable. The NPS is proposing to reconstruct the weir in a fashion that would allow the weir to again monitor spawning YCT and would minimize impacts to hydrology and wetlands or waters of the U.S. and their associated values.


G.2.2.7. Grayling Creek
This project would remove non-natives such as BNT, RBT, and CTX by use of piscicide followed by a restocking of AGY and WCT. A small existing bedrock waterfall would be modified to ensure it is a complete barrier to passage by nonnative fish (rainbow and brown trout) as they attempt to move upstream. The waterfall is located out of public view in a steep canyon near Montana HWY 191, 15 miles north of West Yellowstone, MT. The waterfall is approximately 2 meters in height. A deep (1 m depth) pool (“plunge pool”) exists immediately downstream at the base of the falls. The falls is bounded by bedrock and boulders on both sides.


G.2.2.8. Soda Butte Creek
This project would protect remaining YCT in Soda Butte Creek upstream of Ice Box Canyon. In order to preserve native Yellowstone cutthroat trout in the upper reaches of Soda Butte Creek we would modify an existing bedrock waterfall to ensure it is a complete barrier to passage by nonnative fish (rainbow and brook trout) as they attempt to move upstream. The waterfall is located out of public view in a steep canyon (Ice Box Canyon) along the East Entrance Road, east of Tower Junction. Ice Box Canyon contains a series of small falls and cascades (each approximately 2 meters height) which are bounded by steep bedrock on both sides. There is one feature within this series of falls and cascades that represents a significant barrier to upstream movement of trout. However, a large crack in the bedrock has formed a chute that may be passable by fish under some flow conditions. Of particular concern is the west bank of the falls where a large crack in the bedrock ascends the falls creating a single steep (but potentially passable) cascade.
G.2.2.9. Specimen Creek
During 2006 – 2010 native westslope cutthroat trout were restored to the East Fork of Specimen Creek (EFSC) temporarily isolated from the remainder of the Specimen Creek watershed by a man-made barrier to upstream movement of nonnative trout (rainbow and brown trout). The EFSC fish barrier is a log structure placed in a remote canyon, 5 km from the trailhead at HWY 191. Although this work represents a significant advancement in the conservation of westslope cutthroat trout, the overall goal remains to restore the entire watershed (including the North Fork of Specimen Creek and the mainstem) extending downstream to near the HWY 191 road bridge. Upon completion of the watershed restoration, the EFSC barrier would be removed and the area rehabilitated to its natural condition.


To restore native westslope cutthroat trout to the entire Specimen Creek watershed, it would first be protected from invasion by downstream sources of nonnative trout (in the Gallatin River) via a permanent fish barrier constructed largely of concrete and steel. The barrier site is well within public view near the Specimen Trailhead parking area, 26 miles north of West Yellowstone, MT. The site consists of an abandoned road bed (old HWY 191) that intersects Specimen Creek approximately 75 meters upstream of the existing highway bridge and forms an existing low “dam” across the floodplain. Specimen Creek flows through a narrow notch in the embankment, where a bridge once stood. Analysis of this site using Hec-Ras hydrological modeling (White 2008) indicates that it is a feasible site for barrier construction. Bankfull widths of the creek average 9 meters at undisturbed cross-sections

﻿You may not believe in poisoning one species to preserve another, but hundreds of thousands of miles of streams with introduced species will remain in Yellowstone and surrounding states. These planned measures represent a fraction of a percent of total fishable water.

Read over the plans and provide your comments in support of the plan by using the link below. From my TU friends in Wyoming and Montana:

Tell the Park Service:
You support its stated objective to make suppression of lake trout in Yellowstone Lake the highest priority action for native fish conservation in the Park;You support the Park's stated, measurable targets for restoration of the Yellowstone cutthroat population in the lake, as well as the objectives for stream miles to eventually be occupied by westslope cutthroats and grayling;Also, ask the Park to:Increase the time and resources it dedicates to lake trout removal to ensure the population of this non-native predator is reduced to numbers that result in a significant rebound of Yellowstone cutthroat trout numbers.


Employ rigorous monitoring to ensure the Park meets its stated objectives, and to implement important research projects that help the Park better understand where lake trout spawn and how they move about the lake. This important information will help ensure the Park achieves its objectives.

Implement the recommendations from a science panel the Park convened in 2008 to help guide its efforts on the lake. These recommendations can be viewed at: [www.greateryellowstonescience.org/files/pdf/Gresswell_FINAL_color.pdf]

I recently received my certificate for completing the California Heritage Trout Challenge. Of the individuals to complete the challenge, I am number 151. 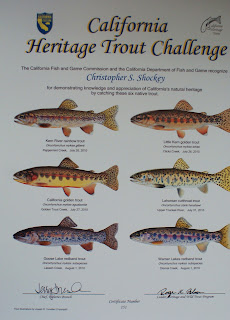 The species I submitted for the CHTC, all in their native watersheds, were:
I also caught the McCloud River Redband, but I will save that one in case I catch the remaining species in the challenge.

This certificate will look nice with my Wyoming Cuttslam certificate.

The species I submitted for the Wyoming Cuttslam, all in their native watersheds, were:
Also hanging with the two official certificates will be my "unofficial", self-created, Colorado Cuttslam.

The three native species from Colorado, all in their native watersheds:
Happy New Year and here's hoping 2011 brings a Wyoming and Colorado Cuttslam for my son.