Another New Member to the Sport

A couple of things I enjoy most of this sport: exploring new places/water and introducing new people to the sport of fly fishing. I get equal enjoyment out of both!

My only outing prior to this one was to introduce a fellow co-worker (and Aggie) to the sport and to show him what West Virginia has to offer in the way of scenic beauty. This time I would help introduce another generation to the sport and hopefully provide some guidance for his trip to Colorado in late July.

The interesting thing about this individual is that a few years earlier I taught his dad how to fly fish and I also took his dad to Colorado for the first time in 2011. I was also able to put him on every native species of cutthroat Colorado offers, including one of the top three streams I have ever fished in the west - I refer to it as Cutthroat Heaven.

When I introduce a new person to the sport, I like to start on a good brookie stream. There are a couple of reasons I start this way: brookies will hit anything big & fuzzy and there are plenty of strike opportunities to keep them interested. I talked it over with "dad" and we decided on a big brookie stream, with plenty of space (for casting and three people), and it also happens to have a good population of larger fish. Other than Seneca, this has become one of my favorite streams.

The first thing I always teach them is how to read the water and where the fish, most likely, will be located. From there, I go with the high stick drift...no need to worry about casting. It didn't take long for "junior" to catch his first fish on a fly rod while, basically, standing right over top of it.

Father and son sharing the moment. 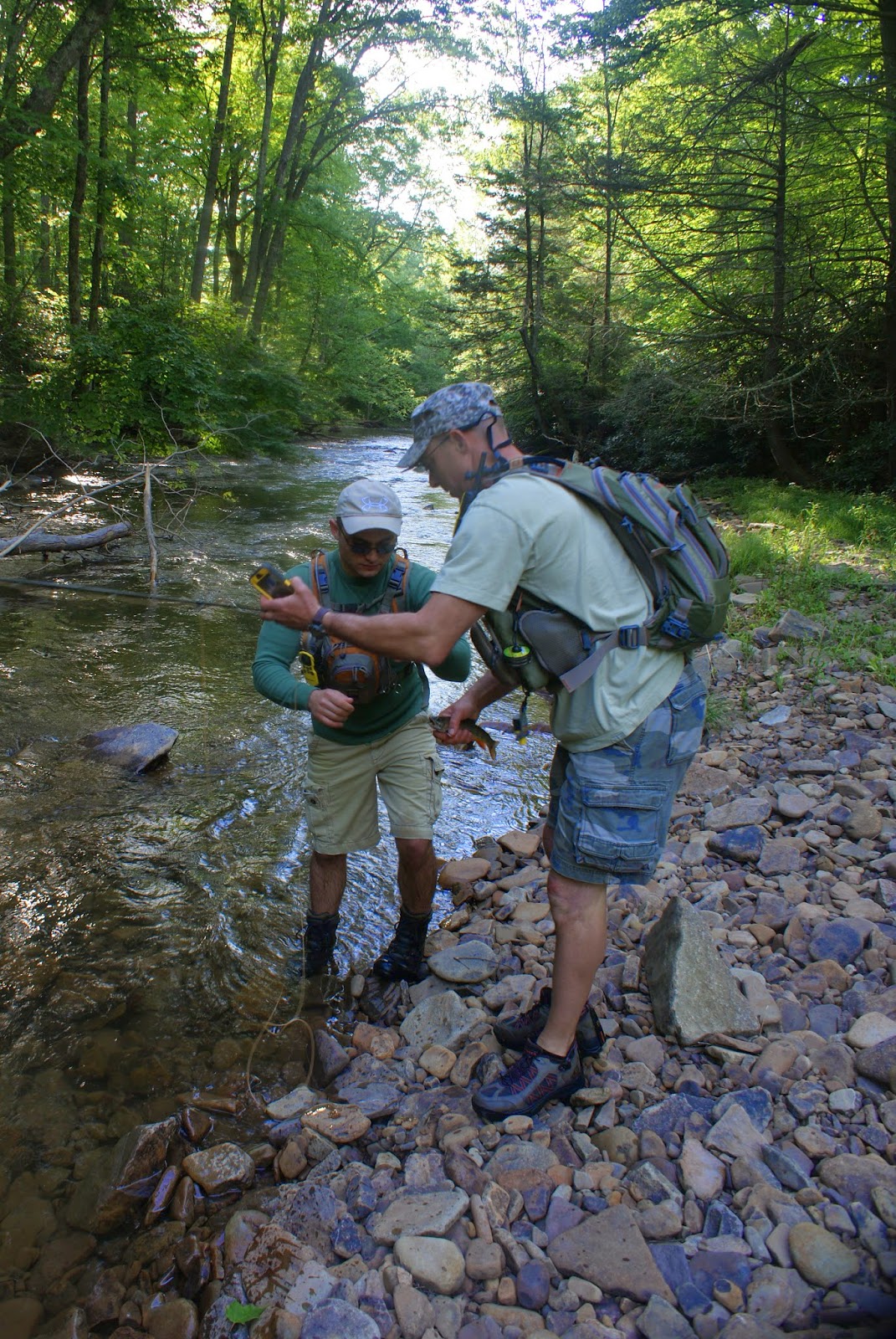 "Junior" with his first trout on a fly rod; a nice, native West Virginia brookie. 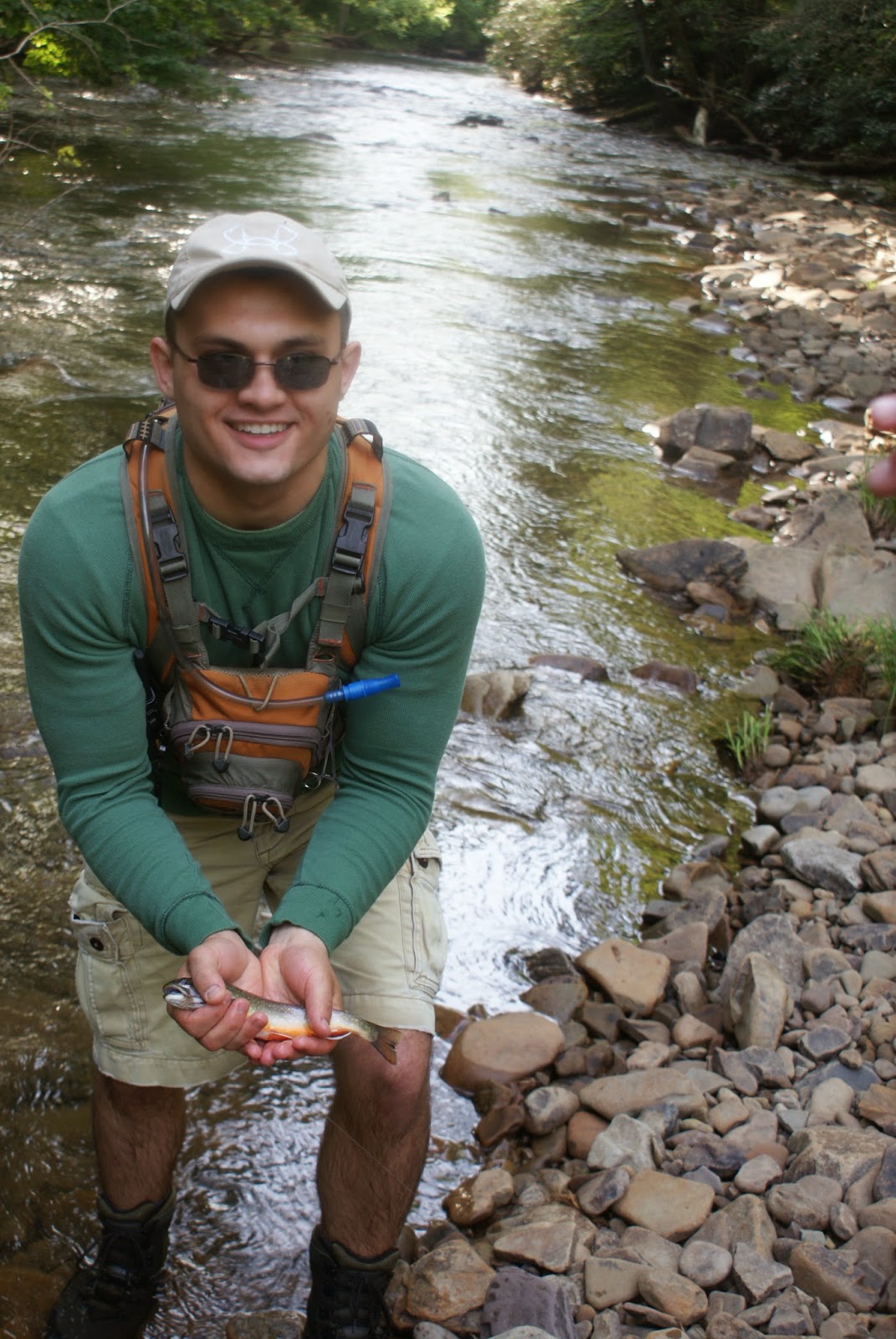 After it appeared "junior" had a slight grasp on the system, and with dad assisting as needed, I was able to poke around a bit and land a few nice brookies of my own. 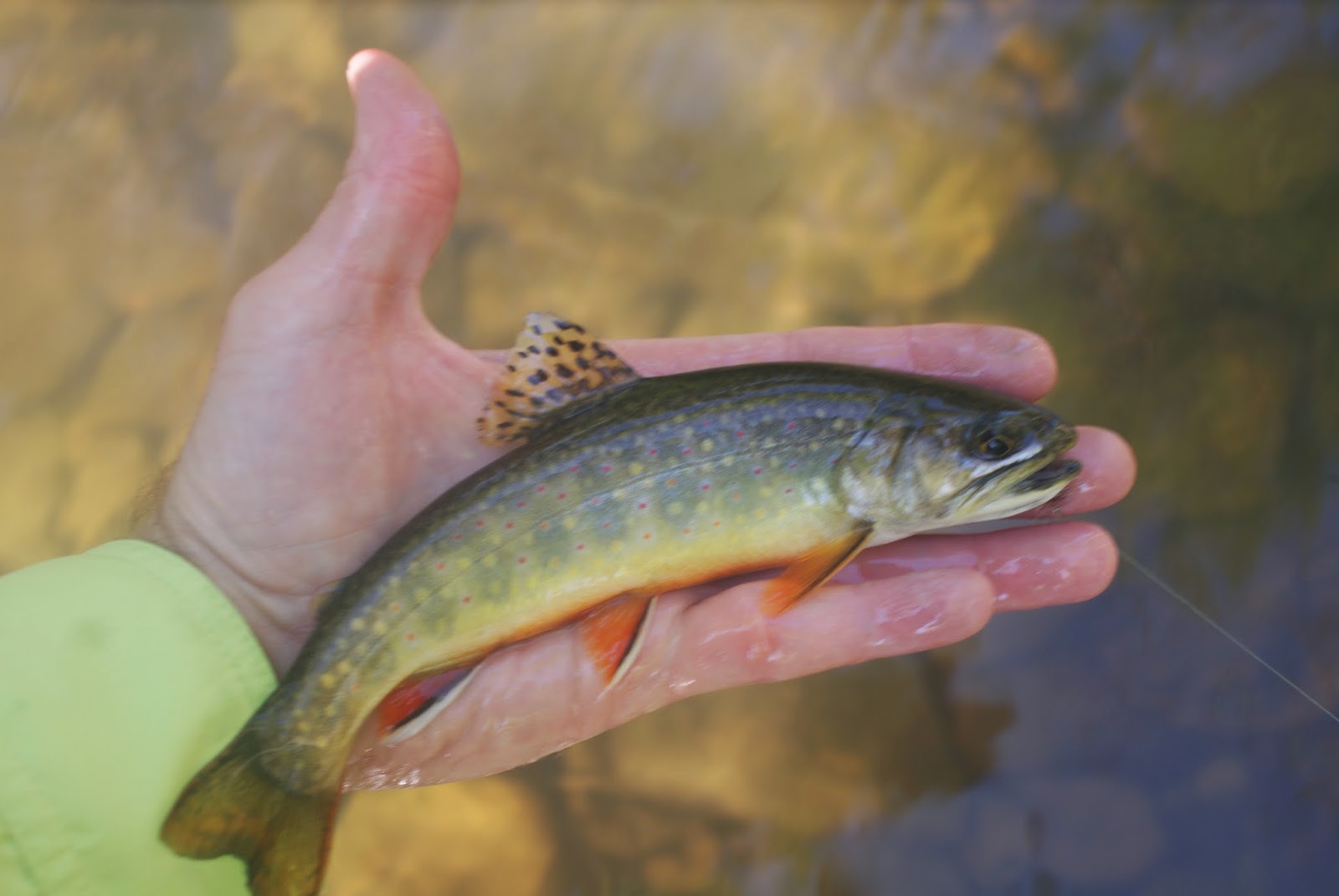 Soon after, dad got in on the action. 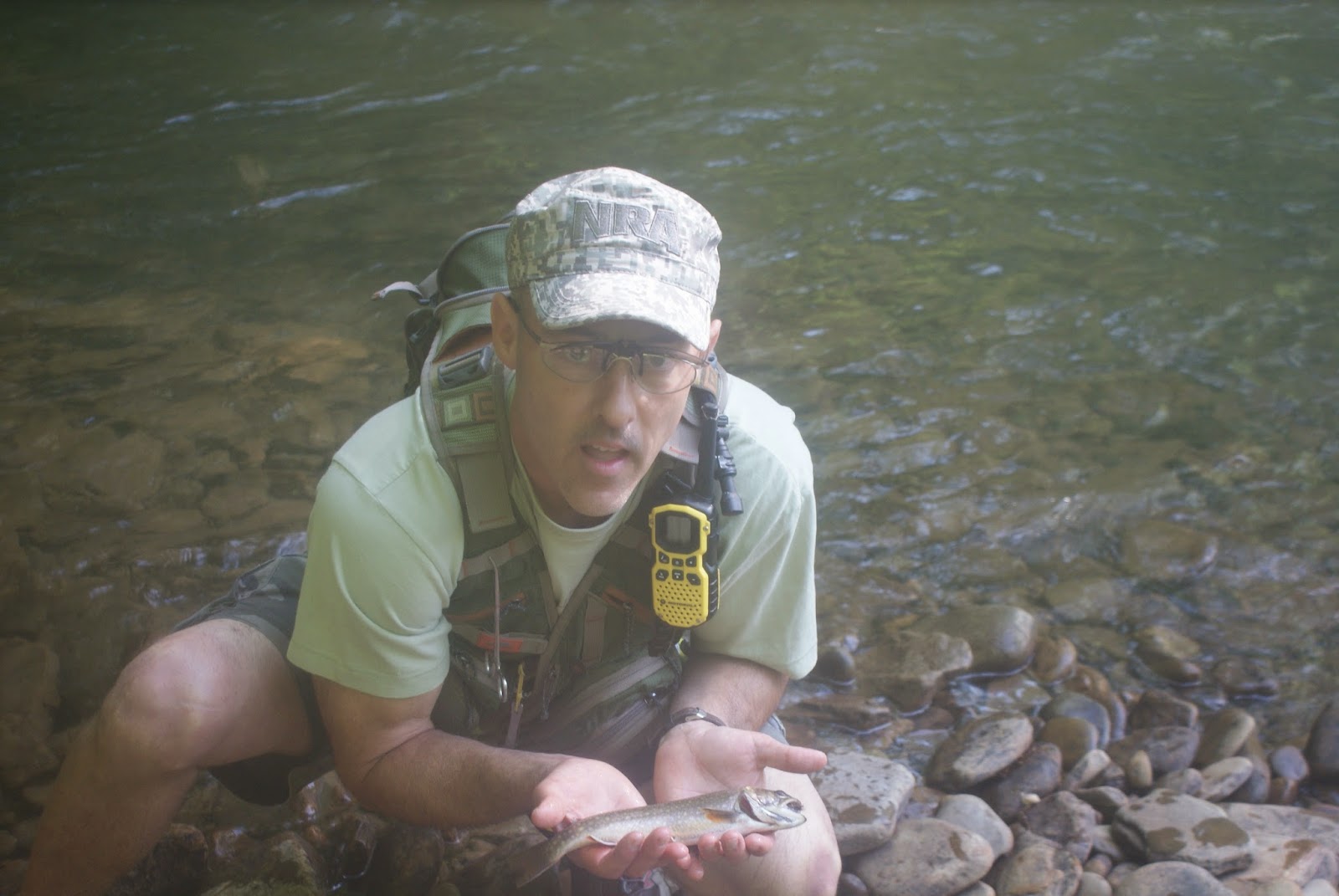 With everyone into fish, we moved much quicker upstream, picking up fish from nearly every decent looking pool.

It was nice to lag behind and watch father and son enjoying the time on the water. With the video game craze, this is becoming even more rare every day. 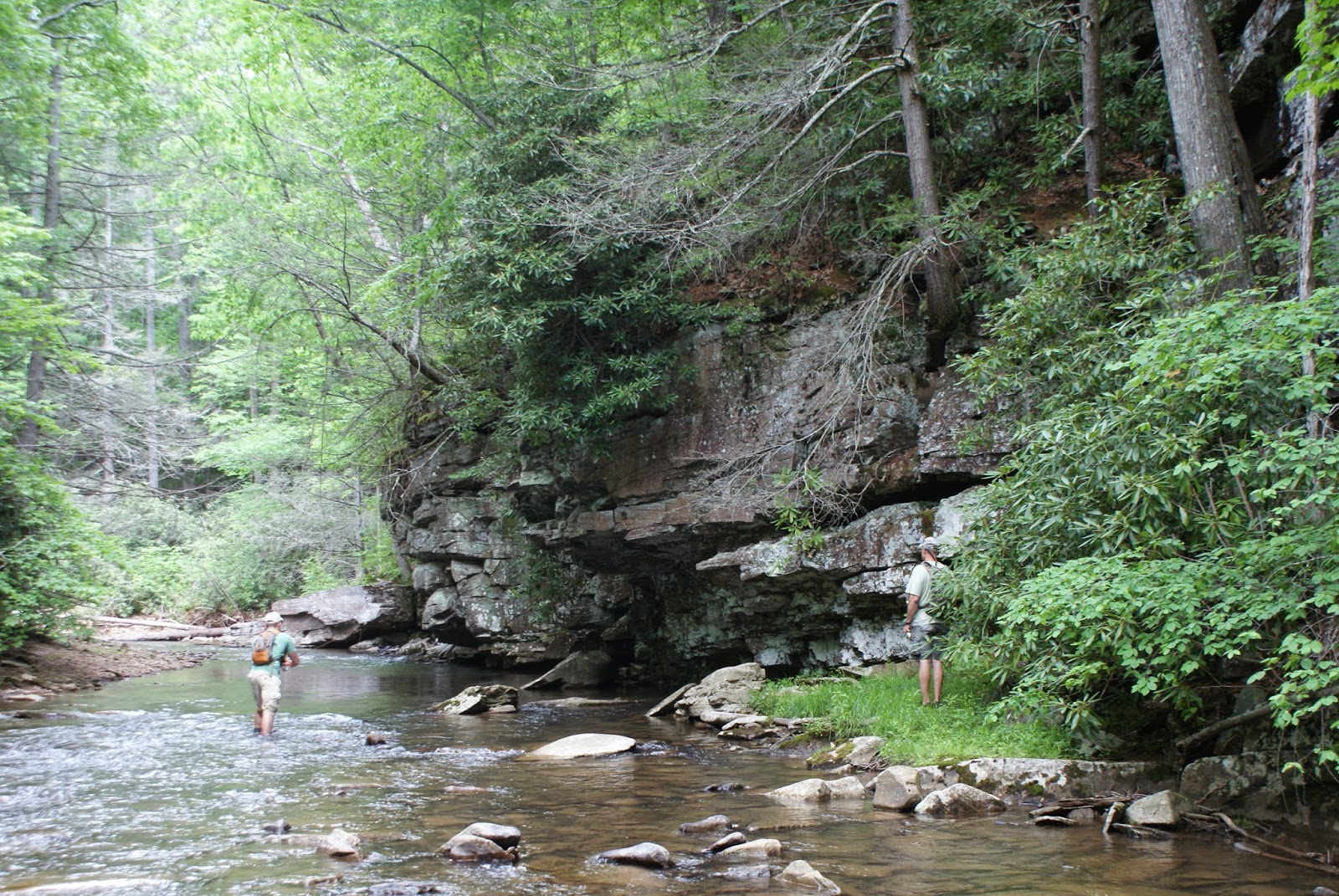 As much as I enjoy introducing new people to the sport and showing them around some of my favorite places, I still enjoy catching fish. Even fishing used water, I was able to pick up the occasional brookie. 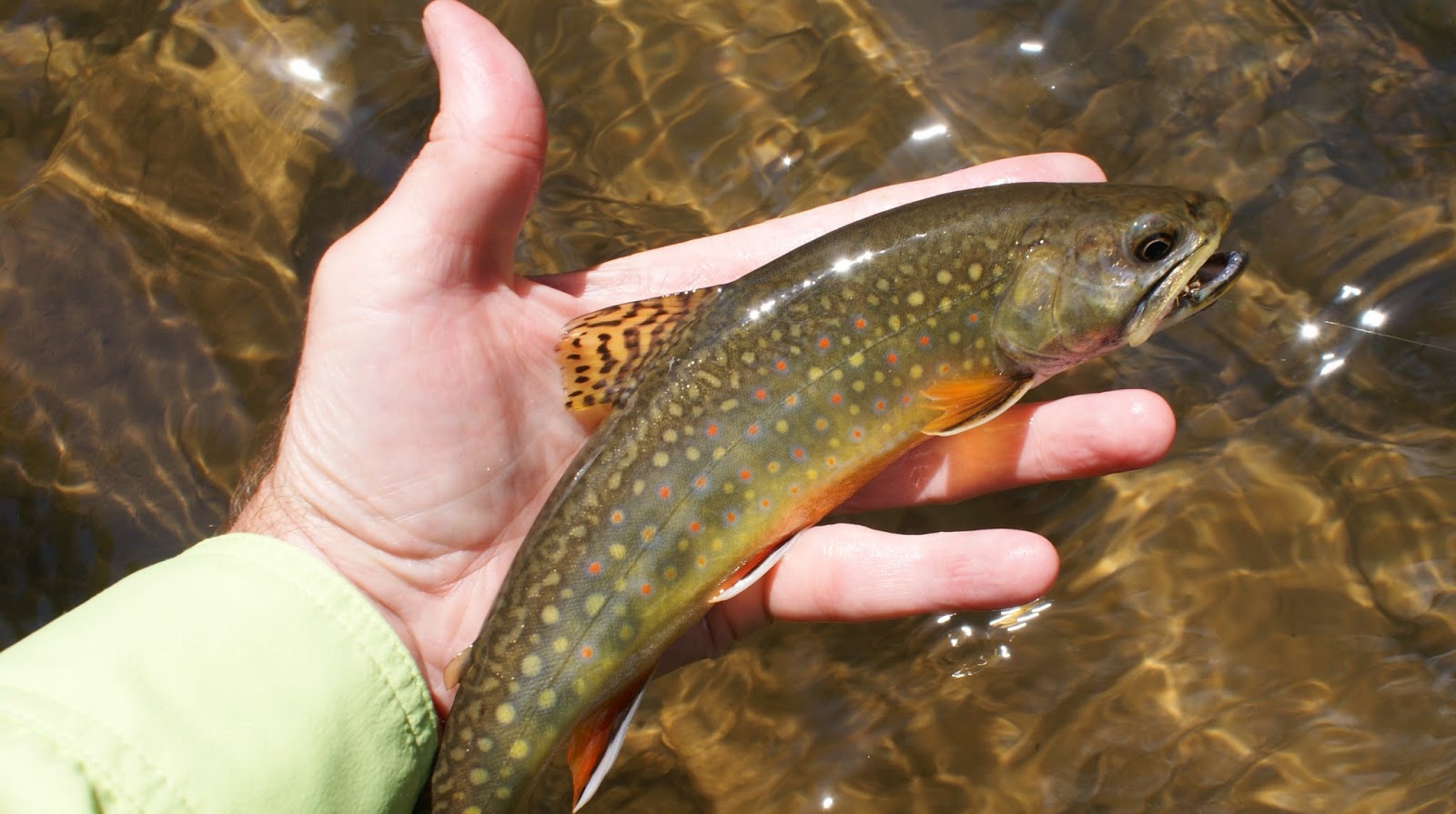 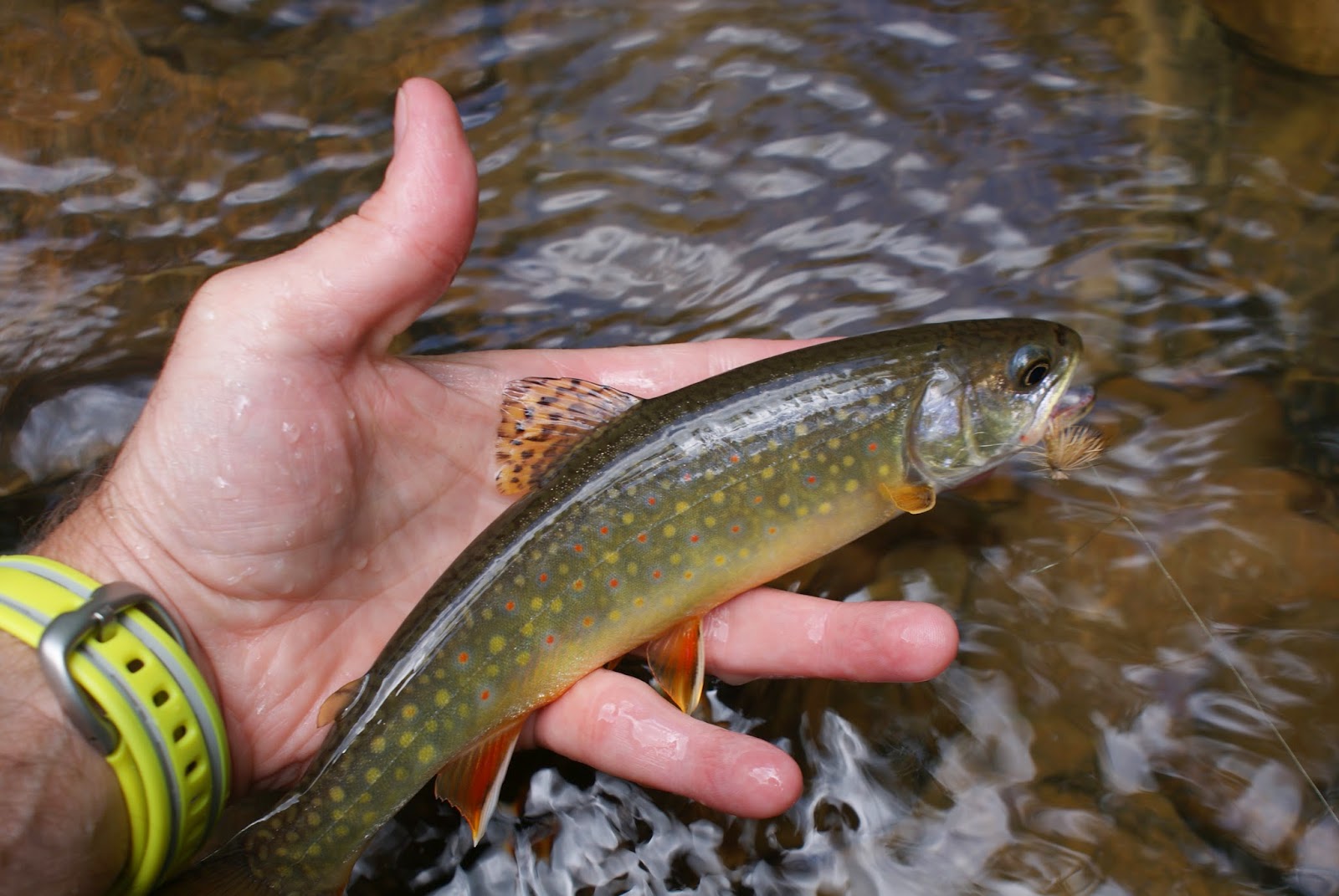 We fished well upstream, further than what I realized actually. After about a two mile hike out and some snacks/drinks on the tailgate, it was off to Seneca Creek to catch a few wild rainbows for dinner. That didn't work out to well...we landed plenty of fish but nothing of size to make a meal out of - car camping food for dinner it would be.

Our last stop for the day was Seneca Shadows campground for the night. I have been past the entrance of this campground a hundred times, but I have never stopped or stayed here. That has been my loss as this was the view from our tent site. 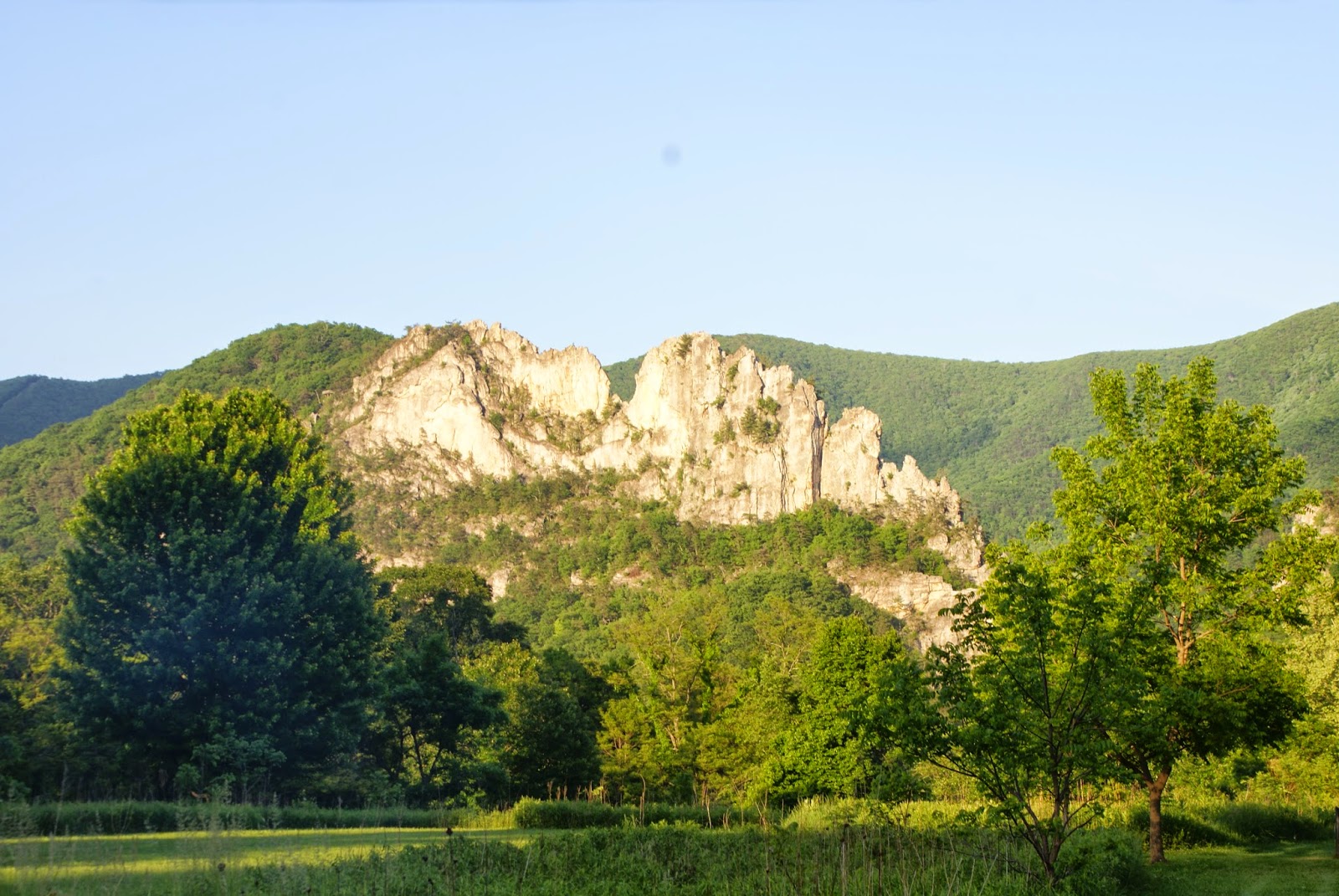 This is where I get sentimental for a moment. The reason I hadn't fished much was the business within the company I had worked for 21+ years had been sold and this was my last night as an employee of the former company. When I would wake up in the morning, I would be an employee of a new company. This hasn't happened in over 20 years and even though my job or my coworkers weren't changing, it was definitely a new chapter in my life. That always causes me to reflect on memories of what once was and thoughts of what will be.

The one thing I finally came to realize was: I like change, I'm an explorer! Let's get this party started!

With that now behind me, I slept well and felt no different when I woke up...let's go exploring!

The next morning was a couple of quick stops to streams I had not fished previously. I hadn't checked off any new West Virginia streams yet in 2014 - that changed this day.

The first stream was one of the last two remaining streams in the Seneca drainage. It was a small stream and the water was a bit low, which made fishing with three people difficult. I left the father and son to fish together and I pushed upstream far enough to give them some space to explore on their own.

I quickly picked up a small brookie in a small plunge pool...add this stream to the list. 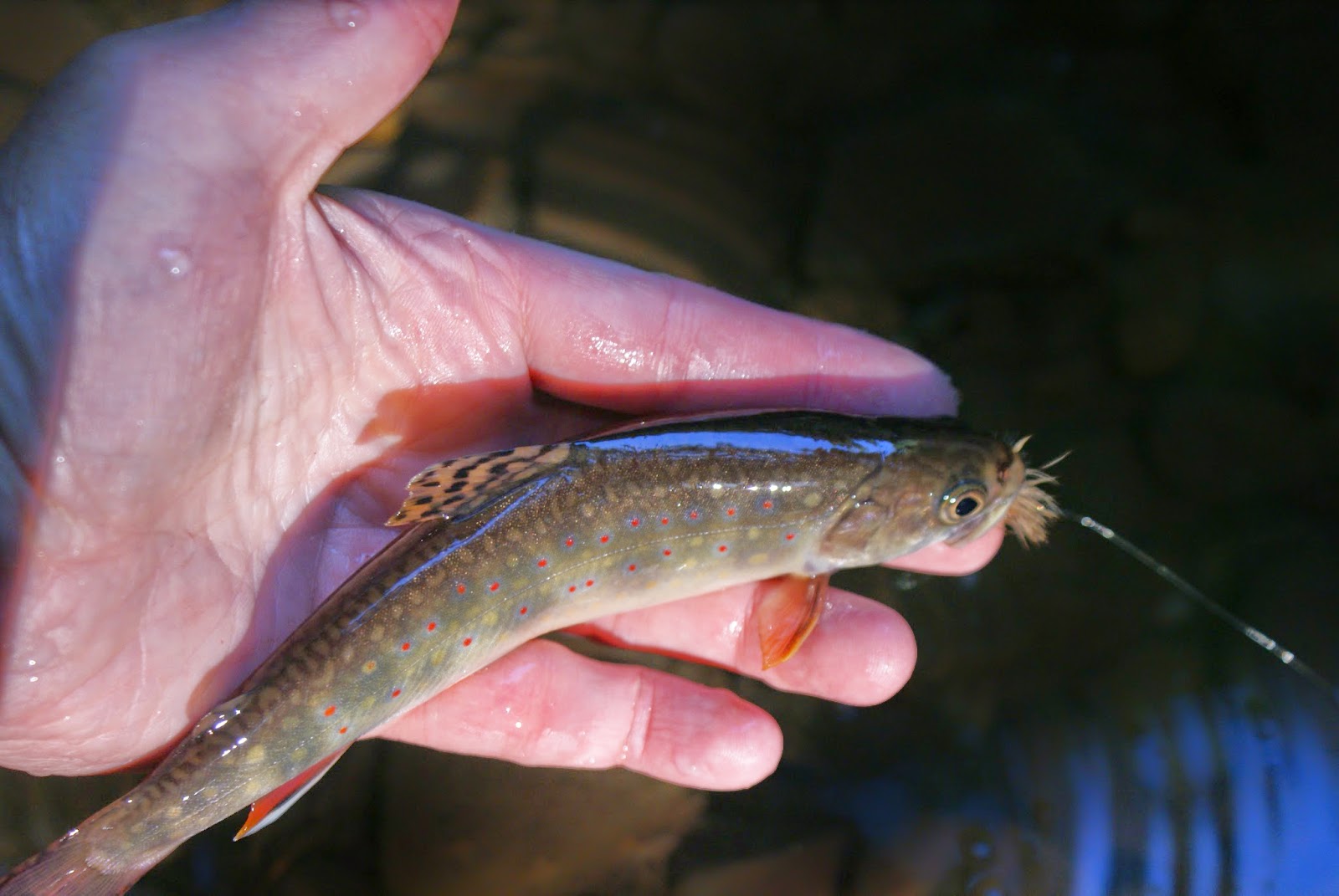 I moved up the high gradient stream, skipping most of the marginal water, until I spotted a good-sized pothole about eye level. With a high stick drift, I caught another brookie and a decent one at that. 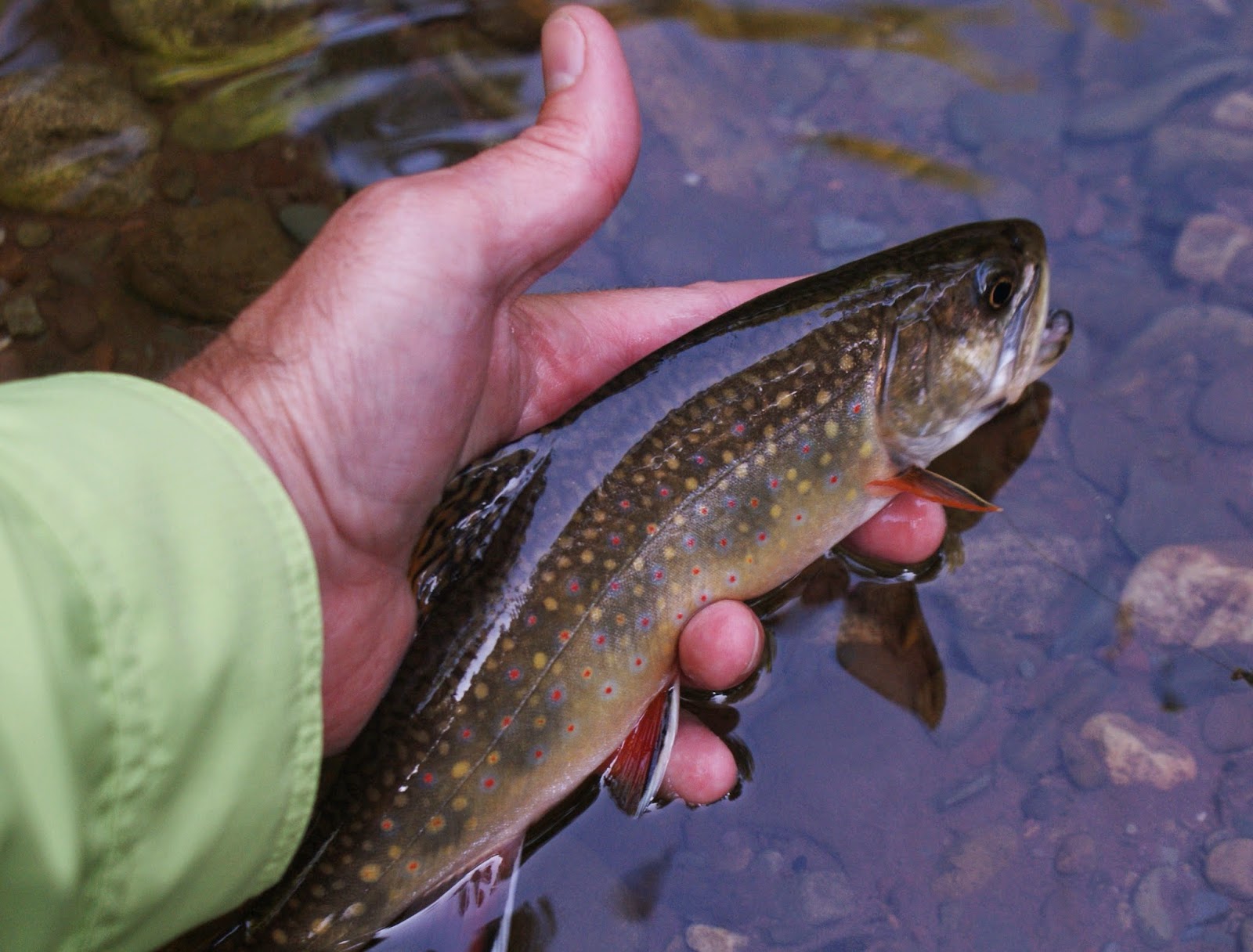 I studied the GPS and topo map and decided I needed to return to this stream sometime and explore further upstream. I've heard there are wild rainbows in here too, so I added it to my never ending West Virginia streams to pay a return visit.

After a decent fish to finish up this stream, I moved back downstream to pick up the boys and move to another stream on my list.

I've stared at the mountain contour which contained this stream every time I travel down the east side of Rich Mountain. Today would be the day i would finally check this one off the list, so over Allegheny Mountain we went to where the GPS indicated the mouth of the stream should be.

We parked the truck and waded across the main stream to the mouth. After a quick couple of drift at the extreme low end of the stream, we decided to pick up an old Forest Service road and hike upstream.

I picked up the first little brookie at the bottom of a culvert hole where the Forest Service road crossed the creek the first time. 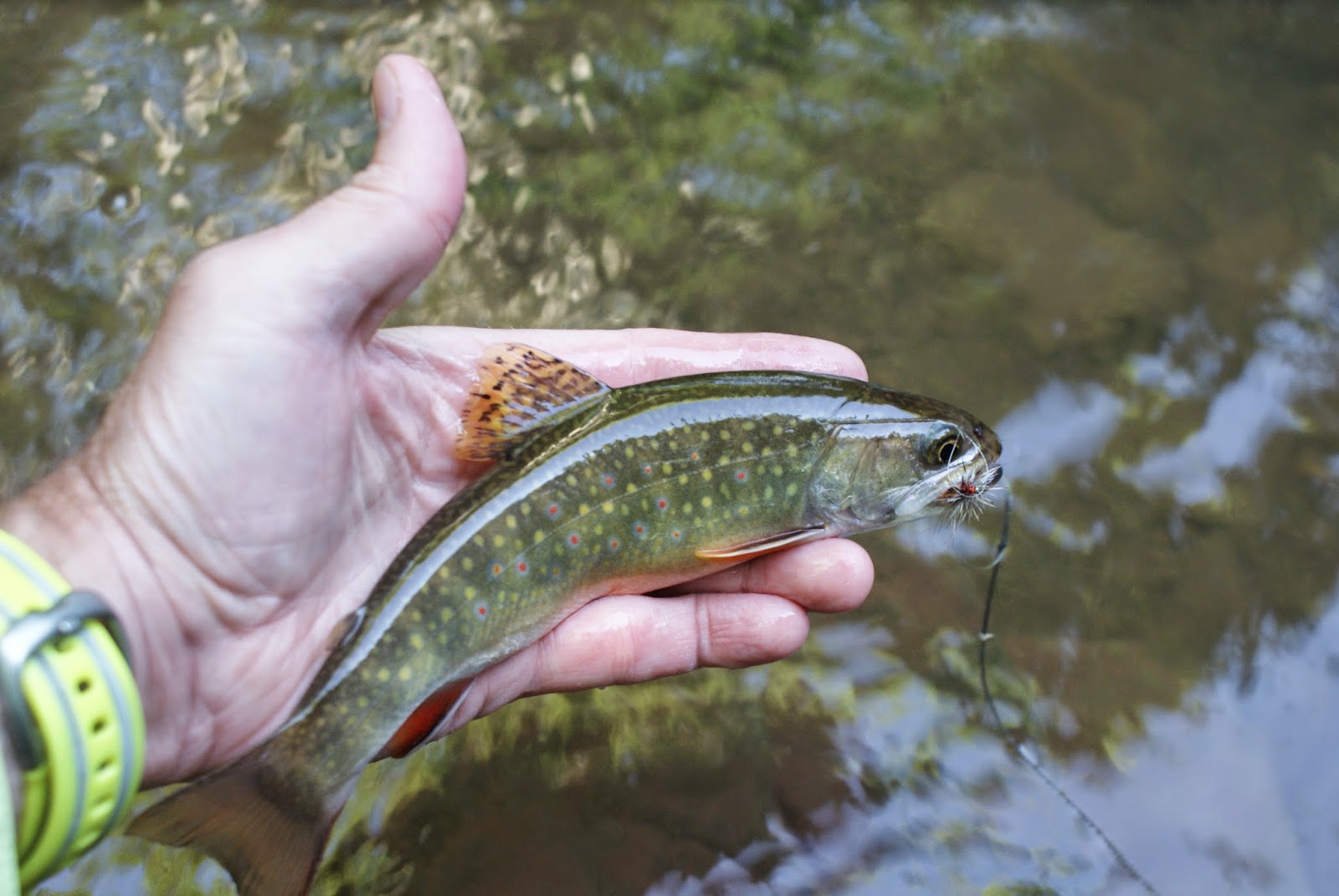 It's a good thing I caught that brookie in the first culvert hole because I didn't move another fish in that little stream. There seemed to be an excessive amount of silt in the stream. I believe there is a grazing allotment at the top of the mountain and that may have something to do with the siltation, but who knows?

After adding another member to the fly fishing community and adding two more brookie streams to my West Virginia life list, it was time to head for the house...more memories created and time to reflect - that's why we do this, right?