The last weekend in June was the 5th annual WVAngler campout. In my opinion, WVAngler is the best thing to happen to trout fishing in West Virginia in recent memory. The site is a great source of information, great for coordinating/communicating conservation activities, and general all-around good people. Through this site, I have met and fished with folks who I don't only simply consider friends, I consider them life-long friends.

Each year we pick a location and gather for a weekend of fishing and camaraderie. This weekend we were located in Elkins - West Virginia trout central.

On Friday I finally met up with a fellow board member who has invited me multiple times to fish one of his "jewel" brookie streams. This isn't your typical dry fly fishing stream. This is a weighted woolybugger, dredging the bottom, monster-hunting stream. I've heard reports of native brookies pushing 16" caught out of this stream...but don't ask, because, out of respect of my "guide", I'm not telling!

I've caught my fair share of native brookies, but I may have caught my biggest to date out of this stream. From fingertip to watch band, my hand measure 8". This may have been my first 12"-class native brook trout. 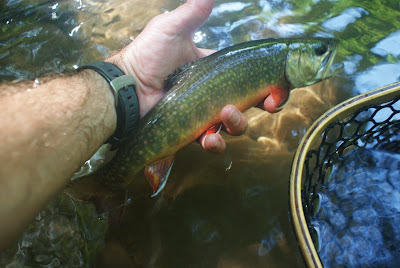 My fishing partner (aptly, he goes by the handle of brookie on WVAngler) caught the fish of the day, a true two-hander. 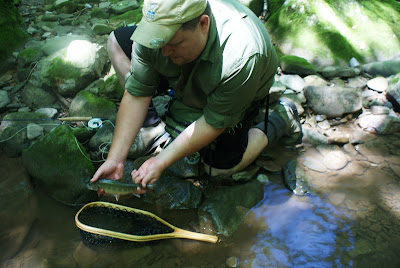 I didn't land any of the monster brookies, but some of the fish I saw take a swipe at my woolybuggers would have been 14" easy. A truly amazing stream! Did I mention there is an old limestone quarry near the head of it?

That evening it was an incredible time with friends around a nice campfire.

The new guy to the stream was fellow native angler and my partner for my 2007 Native Salmonid Roadtrip. He is as passionate about the natives as me and this stream has been on his list for a couple of years, we simply couldn't coordinate it.

I did manage to pick up a few fish, but this wasn't about catching fish. This day was about spending time on an incredible stream with great friends. 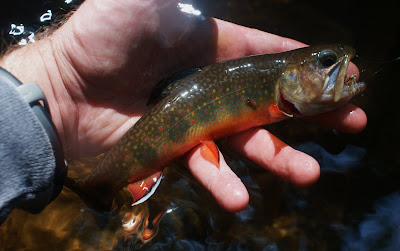 It's always a good sign to pick up the little guys, particularly considering about 15 years ago this stream was dead. 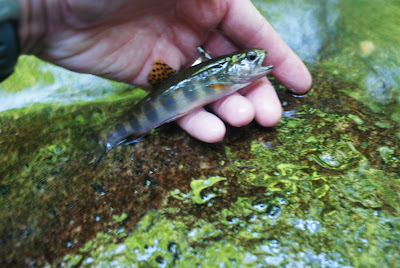 I hung back, took photos, played hide-and-seek, and (on a dare) took a dive into one of the deeper pools.

Here is the pair splitting a section of small pocket water. 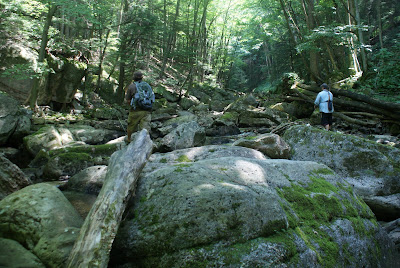 Everyone I take in here, I try to get a photo of him under this stream landmark. 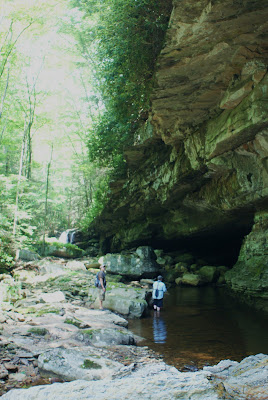 Just above the "cave" hole are the falls. 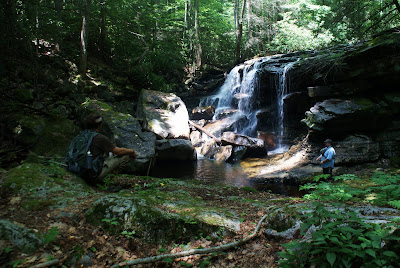 Recently I've found that as much as I enjoy exploring new water, I enjoy sharing these waters with friends just as much, if not more.

I don't know that I have ever had a better time on the water! 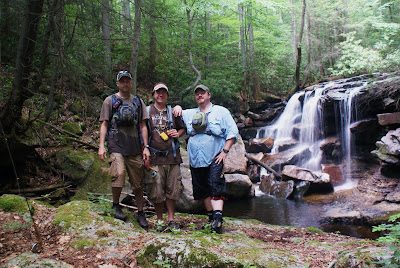 On the hike out we made another friend! 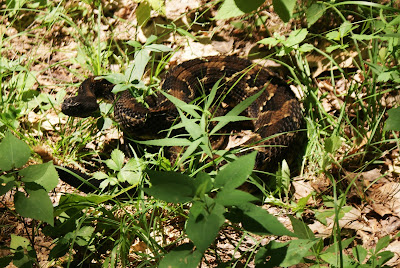 I always watch the trail when I hike, but I nearly stepped on this guy. He was stretched out straight and with his dark colors; I thought it was a tree limb in the trail. We guessed him to be about 4' and he was as big around as my arm - the biggest timber rattler I have ever encountered. Turn up your speakers!

Following a successful journey into on one of my favorite streams I took them to another stream that I fished for the first time in 2009. I actually fished a little harder on this stream - it was slow going and I had to prove to them there actually were fish in there. At one point I may have jokingly offered to provide lessons.

Finally, back at the trailhead at the end of a long day. 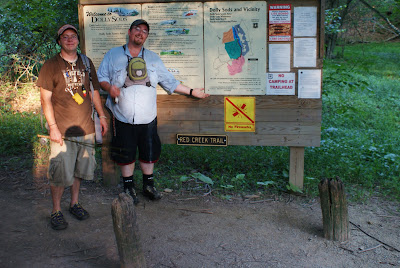 That evening it was another round of good times, exchanging the day's fishing tales. I thought our adventure would have been the story of the day....I was wrong! There was one story that topped them all and it will be discussed at all future WVAngler campouts.
I did stop to fish one stream before heading back to Kentucky. The stream was brutally low and the fish were pooled up. One thing about the fish pooling in low water conditions, you can see what is really in the stream. Note to self: you must fish this stream during normal flows!
This is probably all of my West Virginia posts for a few months. My next entries will most likely be from my massive road trip in search of 11 new native salmonid species. Wish me luck!
Chris
Posted by Chris S. at 8:27 PM 3 comments:

Following a nine-hour drive from Myrtle Beach, South Carolina I unpacked, repacked, and thirty minutes later I was on the road for the beautiful mountains of West Virginia. It was the weekend for the third annual Middle Fork of the Williams limestone fines bucket brigade.

Four hours later, I had camp set up and had just enough light left to add another new brookie stream to my personal list. First drift... 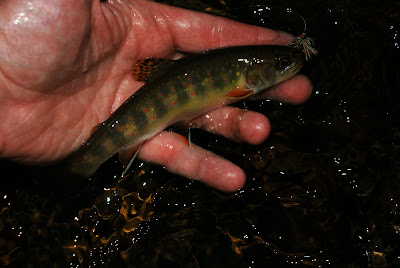 The next morning I was up at daylight, made myself a nice cup of coffee, and picked up on the stream I had fished briefly the evening before. 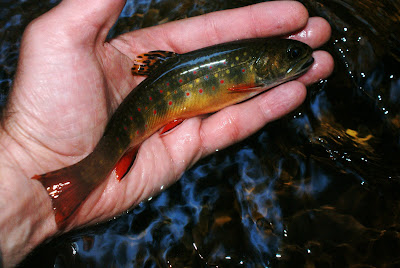 While at Myrtle Beach I picked up a new wading shoe, the Vibram FiveFingers. It was really nice to feel like you were wading barefoot, but the jury is still out on the traction they provide. 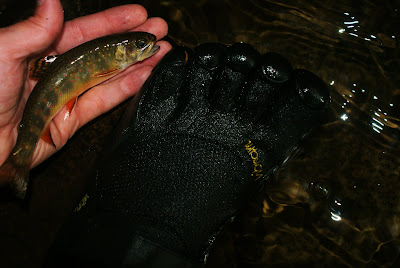 Following a brief, successful outing on this new stream it was off to the Cranberry Visitor's Center. I will not go into the details of how the bucket brigade works, you can find them in the 2009 Bucket Brigade entry.
The details I will provide:

We also received $5,000 in grant money from American Electric Power and another $1,000 from the Rocky Mountain Elk Foundation.

The shirts worn by the Walmart volunteers: 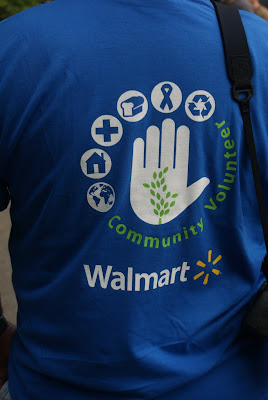 We were rained on and the thunder rumbled, but the spirits and the energy remained high during the entire event.
I had to crop the photo to get the large number of volunteers in the frame.

I spoke with the event coordinator and one of the "founding fathers" of TU in West Virginia and, to the best of his knowledge, this is the largest gathering of volunteers in the history of WVCTU...a feat I hope we can repeat or better in 2011.

Following a fine lunch, for which the rain stopped, it was off to the water again. This would be a special outing, as I would be partnered with the driving force behind the bucket brigade and head of the WV DNR limestone fines program. Our destination would be the Middle Fork itself!

As we strung up our rods at the trailhead the skies opened up again. We tried to wait it out but it wasn't going to let up. As we entered the trail we passed what appeared to be three generations of spin fisherman - not a good sign when the locals know the brookies are back.

I'm not one to stereotype and they didn't appear to have a creel of fish but they did say all of the holes had boot prints around them. I assumed they were fishing close to the trailhead, but that's not where we were headed. We were going in at least a mile before we started fishing.

The driving rain made fishing my typical dry/dropper difficult, but I did manage one on top.

My first Middle Fork of the Williams brookie. I can't describe the feeling I had knowing I did my part to restore this stream that was "dead" for many years! 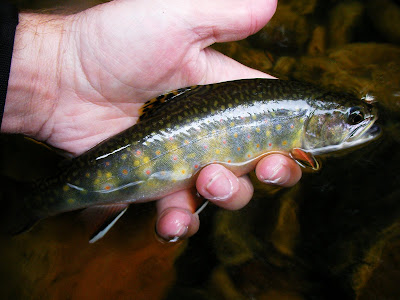 With fishing on top a little slow, I turned to my "go to" pattern - a size 12 olive woolybugger. 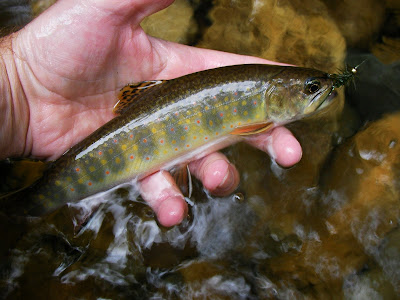 I started picking up brookies more frequently going subsurface, including this brookie, the largest of the day. 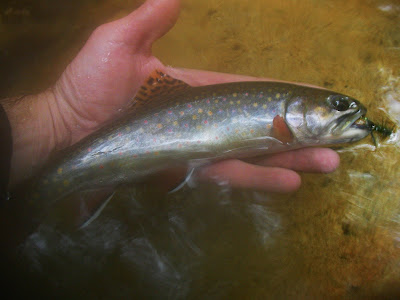 With the relentless rain I left the DSLR in the vehicle and took only my waterproof video camera. The downside to this camera is the lack of filters, the upside is underwater photography. 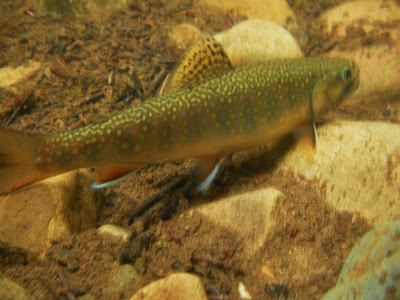 The fishing wasn't anything spectacular, but up until a couple of years ago this stream was devoid of our only native salmonid.

These guys make you wonder what the future holds for this stream. 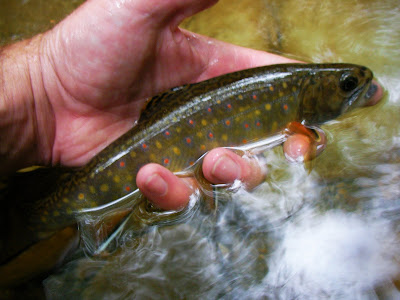 We fished to almost the three-mile mark where there were still brookies present.
An hour hike out and it was time to dry off - even in my raingear I was nearly soaked through. I had planned to stay another night and venture into the headwaters of a stream I fished during this outing in 2009. One remaining set of dry clothes, threat of more rain, and high possibility of high water caused me to cut my weekend short.

There are a couple of TU events I look forward to every year and this one has to be at the top of the list!