With this transfer and a severe winter, it had been over 140 days since I last had a salmonid on the end of the line...and it happened to be in the Smokies as well.

The weekend plans changed a couple of times: we were going to WV, we were taking the family to the Smokies, and finally it ended up being just father & son weekend - because Ross said so!
We pulled out of the gas station in Parkersburg Friday morning at 5:30 AM and by noon we were at the Bass Pro Shop in Sevierville, Tennessee. The plan was to gear Ross up with a pair of waders and wading boots. With the cost of both nearly $130 and an April forecast of 80 degrees, Ross decided he would wet wade with dad.
After checking into the hotel in Pigeon Forge and making a quick stop at Sugarlands Visitor Center, our first destination was Meigs Creek trailhead at the Sinks on Little River. 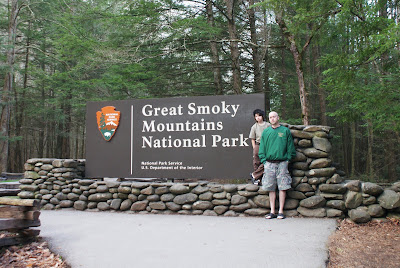 I should have done a little more homework, but I didn't decide on the Smokies until Thursday night. When we got to the trailhead we found it was closed for construction work on the trailhead parking area. The closest pull out on Little River would have added over a mile to the already planned three mile round trip hike. We decided to hit more new water in the area so we headed for Elkmont and the Little River trailhead.
In 2009 we fished Jakes Creek from this trailhead, but this day we were headed up the trail to fish the upper Little River proper.
Ross checking out the history of Elkmont. 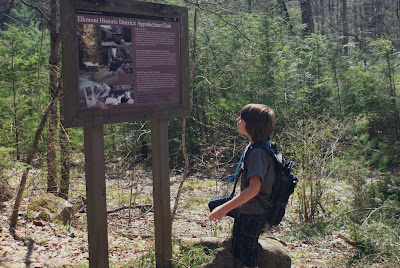 We hiked up the trail about a mile or so - until we thought we were above most other fisherman. I strung up my new 7'6" 4wt bamboo with hopes of christening the new boo with a wild rainbow.
I waded in up to about mid-calf and Ross followed. I remained in the water while Ross was quickly back up on the bank, changing into his dry shoes. "It's too cold!"
I missed a few short strikes and had one long distance release (LDR) but ultimately ended up with a skunk on Little River. My first thought was: here we go again! Ross and I got skunked on our 2009 Easter trip to the Smokies but the water/weather was too nice to be shutout this year.
While we were in the Smokies in 2009 Ross picked up a visitor's guide full of pamphlets for park features. One of those features was Laurel Falls, so with a couple of hours of daylight remaining we decided to do the 1.5-mile uphill hike to the falls.
It wasn't a difficult hike at all, I've done many that were more difficult, but it has been a long inactive winter. In addition, Ross has been playing basketball all summer so I couldn't have been happier when I felt Ross setting the pace up the mountain.
We made it to the falls in what felt like no time at all. 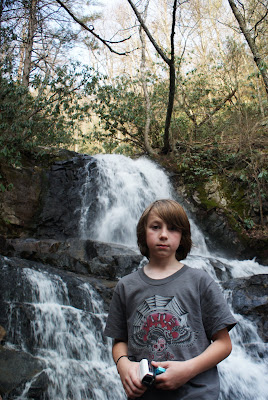 My first attempt at HDR photography. 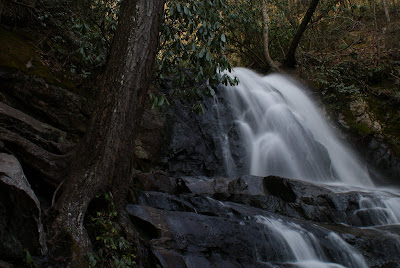 On the way back to the hotel room I explained my personal philosophy on exploring to him. Whether it be fishing or eating, you never know if there may be something better out there if you don't constantly try new things. So, for dinner we tried something different. He said he wanted to try someplace for dinner he had never tried - he picked Popeye's. He listened!

After a round of goofy golf it was back to the hotel room where Ross would study his maps and waterfall guidebook. He found where he wanted to go the next morning. What kid wouldn't want to hike Boogerman trail! Ross had never seen an elk so he also wanted to check out the herd in the Cataloochee area. Unfortunately I-40 is closed at the TN/NC border so there was not an easy route to get there from Pigeon Forge, so we opted for plan B.

The next day we would head to the virgin stand of timber on the Albright Loop trail. I'm 42 and I've never been amidst a virgin stand on the east coast, so this would be a first for me too. In addition to the Albright Grove, the trail crosses Indian Camp Creek and Jim Casada's book rates it as an "A".

After a quick continental breakfast we headed for the unmarked Maddron Bald trailhead. We stopped in the office of the campground that hides the trailhead to ask for directions. While in the office Ross found what he had been looking for - a coonskin cap. Once he had his new lucky fishing hat we were off for the trailhead.

The trail was three miles up hill again and Ross did great again! We did stop a couple of times to rest. 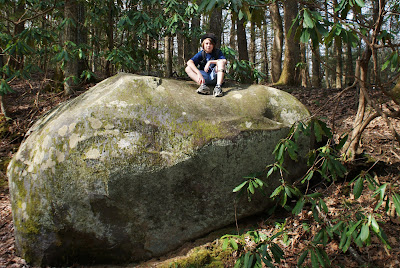 About 2.5 miles up, we finally hit Indian Camp Creek and time to prospect a new stream for brookies. 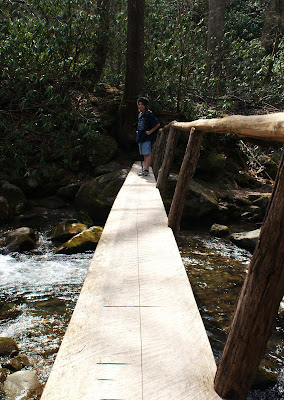 I quickly picked up a brookie below the footbridge.... 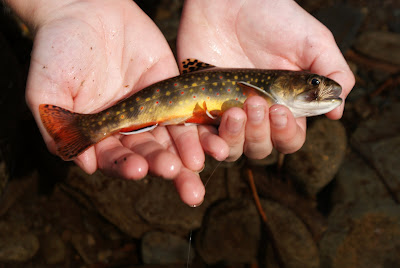 ...and one above the bridge (with my lucky fishing hat). 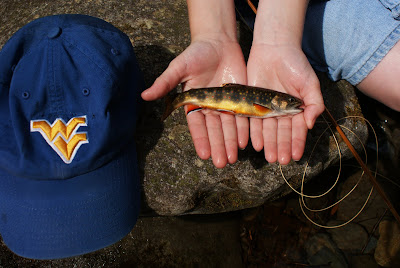 After picking up a quick two brookies, it was onward and upward.

About another half-mile we were in the land of giants (east coast speaking). I'm in my early 40s and I've never seen a virgin stand of timber - on the east coast. These trees were massive! A couple of them Ross and I tried to wrap are arms around and couldn't even get a 1/4 of the base. 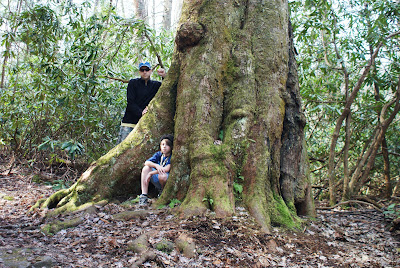 After taking a short break we made the decision to make to head back down instead of further up. While we were taking a rest, the sound of running water got the best of me. We bushwhacked through the rhododendron to another small stream (Dunn Creek).

Wouldn't you know it, it held brookies too! 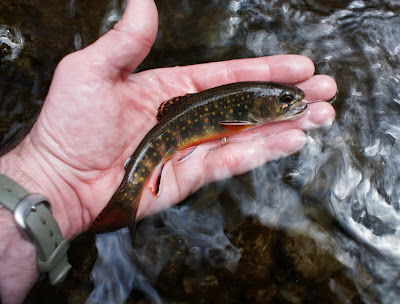 While I was working one of the plunge pools, Ross decided he was going to wet wade with me. However, his wading was unintentional. Next thing I knew he was on the rock with me - bare foot!

I worked another pool or two and decided it was time to head back out so I helped Ross twist his socks dry and head back up through the rhododendron jungle.

On the way back down we stopped at the bridge crossing and scrambled our way about 30 yards downstream. I nearly hit double digits in the handful of pools and pockets I worked. 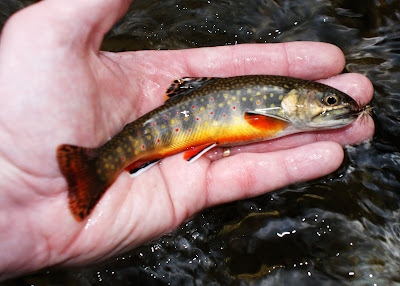 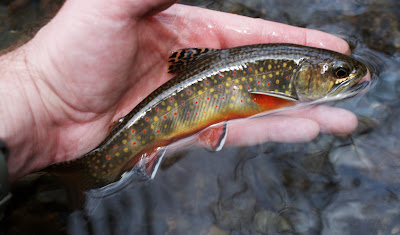 Ross releasing one of the nicer brookies...in his new, lucky fishing hat. 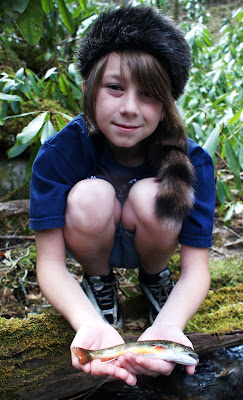 Nearing the bottom of the trail, we decided to take time to visit one of the original homesites (circa 1880s). 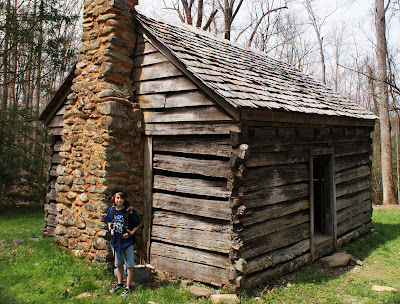 Back at the trailhead, I'm not sure if this is a look of relief or accomplishment. 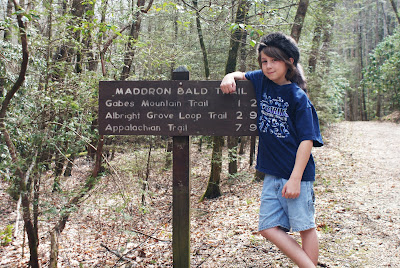 After a quick lunch, we studied our books and looked at the watch. We made the decision to head for Porters Creek. Ross found another waterfall he wanted to hike to up Porter Creek trail.
When we got to the trailhead we discovered that he didn't have dry socks or shoes to hike in - sandal time!
I never miss an opportunity to try to educate a little on our fishing trips. Early spring is the perfect time for wildflower education. The trailhead had several common species of spring flowers and a couple of not-so-common species.
Bloodroot (all I could show him in 2009 was the namesake root): 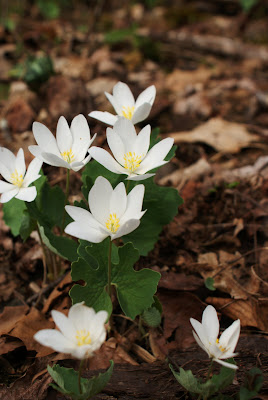 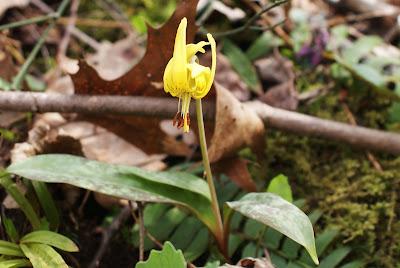 It didn't take long before walking past very "fishy" water and kicking gravel out of the sandals before we were heading back to the car for wet shoes and fishing gear.
We settled on one of the nicest pools I have ever witnessed on a high gradient stream and there were rainbows rising all over the place. I don't know what they were feeding on but they didn't want anything to do with my 18 EHC! Once I put on the dropper (18 BHPT soft hackle), I started getting strikes. I missed several strikes on the nymph before I finally hooked this small rainbow.
The first fish landed on my new custom-made 7'6" 4wt bamboo - a small, Porters Creek wild rainbow. 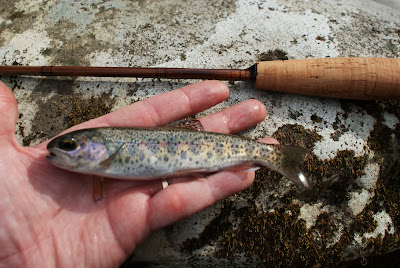 While landing this little guy, I put everything else down. Then, for the first time all weekend, Ross asked to try his luck with the fly rod.

Ross working a beautiful pool with the new bamboo rod, and wet wading just like dad. 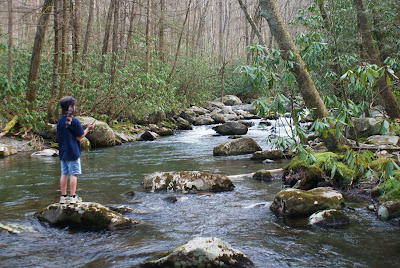 The one rainbow was all we managed out of Porters, so as it was getting late in the evening, we decided to call it a very successful day.

Before grabbing something to eat, we made a visit to the strip in Gatlinburg where Ross took some time to pan a bucket of dirt in search of minerals. We also made a stop at The Day Hiker, one of the nicer specialty stores on the strip.

After dinner, it was back to the hotel room to watch WVU "play" in the Final Four. It was a sub-par performance but it was great to see them on the big stage. One of the most heart wrenching things I can remember in sports was watching the third leading scorer in WVU history (behind Jerry West and Hot Rod Hundley), Da'Sean Butler end his career with a blown ACL. Coach Huggins also earned a great deal of respect, in my book, with his interactions with Da'Sean.

The next morning it was up early to beat the crowds to Grotto Falls before the six-hour drive home.

Again, if I had done my homework, that weekend would have been so much smoother! The road to Grotto Falls was closed for paving. Ross checked his waterfall book and found one right behind the Sugarland Visitor Center.

Cataract Falls is located about 1/2 mile behind the visitor center on a nature trail that begins directly behind the building. 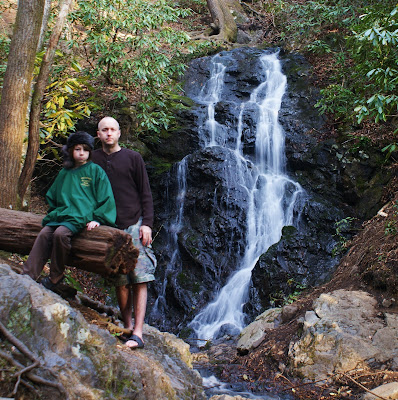 From the falls, it was breakfast at Flapjacks - Ross had been eyeing this place all weekend. So, with his fourth meal of pancakes in three days in his belly, it was time to hit the road for this year's version of Easter in the Smokies.

Ross is already planning our next trip to the Smokies and he also asked about a trip to Yellowstone...that's my boy!