I had planned this Good Friday trip a few weeks in advance so when Maryland received nearly twelve inches of snow earlier in the week, there was no backing out. In addition, I hadn't fished this area of western Maryland in almost nine years!

It's hard to believe just two weeks prior to this I was wet wading in near 80 degree weather. What do they say about March coming in like a lamb?

When we got to the stream, there was still 6"-8" of snow on the ground - and it was cold! Other than the Elkhorn Clean-up, I hadn't worn waders in three years. 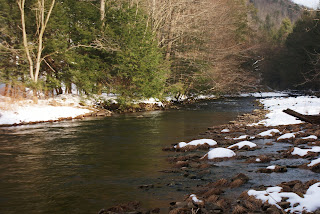 I hadn't fished this area since the cicada hatch of 2004 and since that time there was a 5-year brook trout "no kill" study completed. 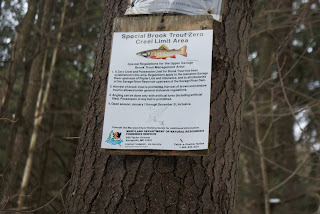 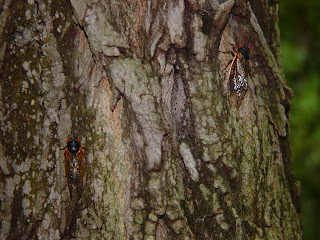 We fished the main branch first but the cold temperatures and some snow melt kept us from moving any fish.

After fishing a short section of the main branch, it was off to the tribs.

Rick was the first to strike with a nice two-hander brookie on a small olive woolybugger. 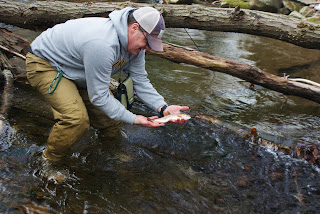 After Rick picked up the first brookie of the day, he gave me the lead on several nice runs. I know there were brookies in there but the cold water temps gave them a bad case of lockjaw.

I knew it was only a matter of time and, sure enough, I soon caught my first Maryland brookie in nine years. A nice, dark specimen was my first of the day. 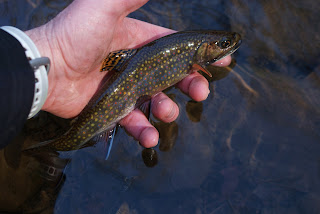 After getting rid of that skunky smell, I soon picked up another brookie. This one was a little bigger, had much better coloration, and had a unique defect.

In all of the thousands of brook trout I have seen, I've only witnessed this on one other fish - he was blind in one eye. 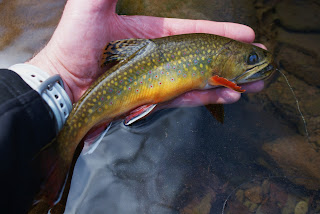 You can see it better in the next photo. The only other blind brook trout I have encountered was actually blind in both eyes.

These guys are survivors! 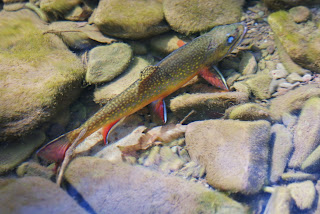 After both of us picking up a couple of brookies, it was back to the vehicle for lunch, then off to one of the other tribs in the vicinity.

The second trib we fished was much smaller. The air temps had increased enough to where I could stop dredging the woolybugger across the bottom and switch to my favorite rig of stimulator with a pheasant tail dropper.

The brookies were digging the small pheasant tail. 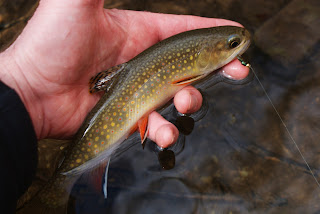 This stream was mostly runs and riffles versus the plunge pools in the previous stream.

I spooked a few brookies before I finally landed another nice brookie under a root ball in one of the larger (albeit small) runs in this stream. 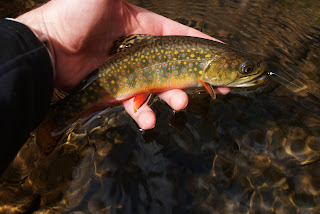 We fished only a short distance on this small stream, but it was nice to add another new stream to my list.

We returned to fish the main branch one more time before calling it a day. I moved one fish off the bottom a deep run, but by this time the increase in air temps had added a good bit of snow runoff to the stream.

I did buy an annual Maryland license so I will be back to explore more of this watershed to see what a 5-year no kill regulation does for a fishery - even though this was an outstanding fishery to begin with.