I haven't wet a line since I returned from my western adventure. I have been working my tail off! I worked 38 of 39 days (most were 11-12 hours), including 32 in a row, and I'm a Monday to Friday guy.

I finally got a chance to return "home" to West Virginia for the annual fall stocking with my TU chapter. This is one of three or four TU events I try not to miss every year and this one usually signifies the end of the fishing season for me.

This particular stream is a limestone fines supported stream. The acidity comes from the high, headwater bogs. 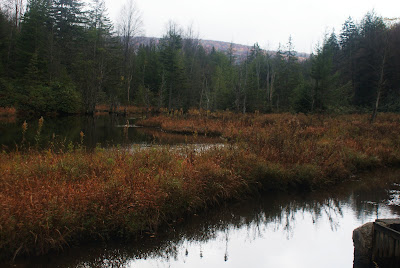 The limestone fines that give this stream life. 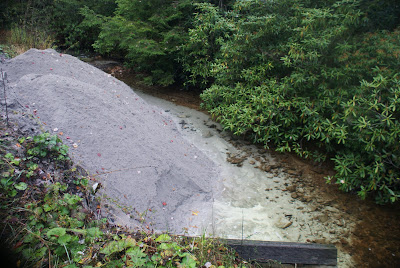 During my previous outings to this stream I would hike in 2-3 miles and fish back to a meandering meadow section. I thought I would repeat my previous patterns on this stream, but it didn't work out for me.
It was mid 40s when I stepped out of the vehicle, but not too cold to wet wade. When I finally stepped into the stream I had second thoughts, luckily I had enough layers on top to survive.
I fished for a good half-mile of stream and didn't even spook a brookie. I made the decision to jump out of the stream and head back upstream to the section my friend had fished earlier - this paid off.
Apparently the feeder stream at this location is highly acidic and above it the limestone dump still buffers the stream. I finally picked up my first brookie just above the junction pool and the little guy was a gem. 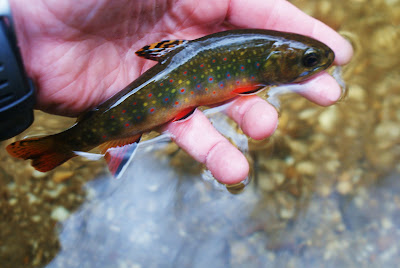 One thing I do remember of the brookies in this stream was the unusual amount of red coloration. The fish were still amazingly colored!

I also soon learned that it was "that time of year" on this stream, as the next few pools offered this: 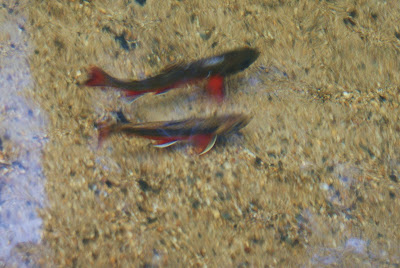 At this point I stepped out of the stream again, ensuring I did not step in/on redds. I did pick up a couple of smaller fish as the bigger and older fish were getting busy.
On the drive back out of the Wilderness Area, the road crossed the extreme headwaters of a stream that I have heard held browns on the lower end. I had plenty of time so I decided I would park the vehicle at the culvert and bushwhack down over the mountain to see what the headwaters held.
I missed a couple of strikes in the trickle that I could literally step over. I soon connected in this small pool: 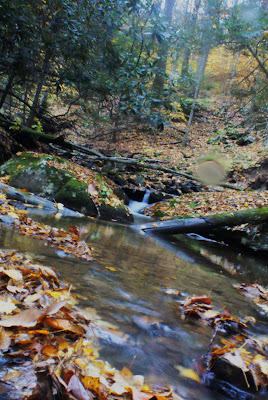 Another small stream, West Virginia gem and another stream to add to my list. 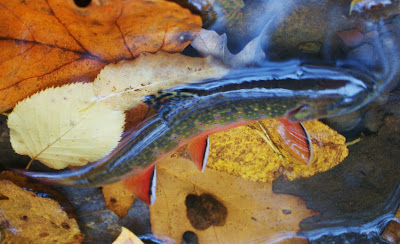 I really hadn't set any plans on where I wanted to fish, only that I needed to be at the DNR cabin in Thornwood to meet the other members of our TU chapter.
On the way to Thornwood I stopped on the lower end of Seneca Creek, right along Rt 33, to have lunch. I parked in the fire department parking lot for lunch and figured while I was there: why not wet a line?

I picked up two small, wild rainbows before packing it in.

Where to go next? I thought about a stream I wanted to fish but my friend had told me this watershed was extremely low. What about a stream that headwaters in Virginia but it was too high and fast to fish when I was on it earlier in the year.
That's how I made my decision. I had caught brookies in this stream where it headwatered in Virginia but not where it flows through West Virginia.
It's a little over a mile on the trail to get to the water. This is a marked trail but it is one of the most rugged, knee-knocking, ankle-twisting trails in West Virginia...and, yes, there is a trail there. 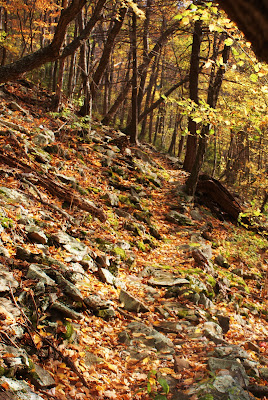 The stream and the fall colors were beautiful! 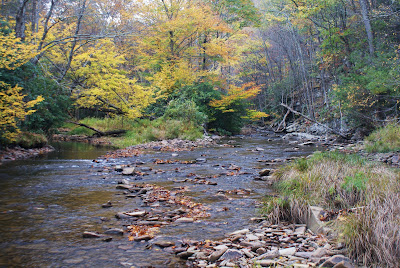 The fish weren't too bad either. 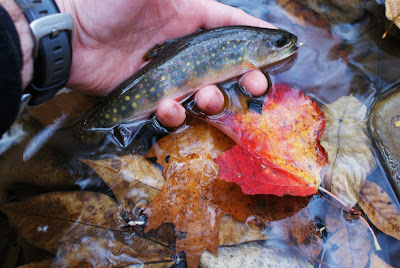 This is a first for me - brook trout from the same stream, but in two different states (Virginia and West Virginia).
After catching a few brookies, the skies started to open up. It was raining in October! I have to say these are the best fall water levels I have seen in years!
With the rain coming down, I figured I could call it a day - brook trout in three streams and wild rainbows in a fourth. Now it was time to meet up with some friends, friends I had not seen in months.
It was a great evening hanging out with friends and swapping fishing tales but it was also an early evening for me...I had another big day ahead of me.
The next day was the annual fingerling stocking on the headwaters of the West Fork of the Greenbrier. This is the last fingerling stocking of the year and a great opportunity to get the kids involved. 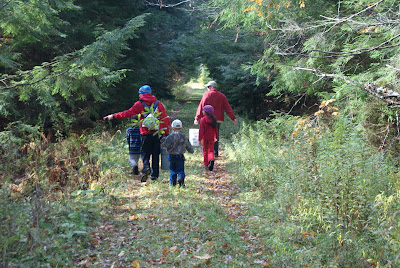 Although downed timber kept us from stocking the waters we normally get to, it was still another great turnout for the Blennerhassett chapter of Trout Unlimited. 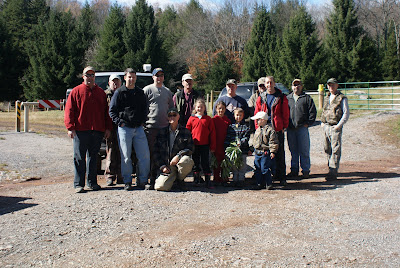 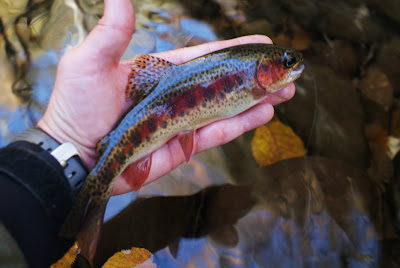 I picked up the majority of my fish on the dropper but it is nice to also pick up the occasional fish on the dry - which I did with this guy.
I landed the only brookie of the day: 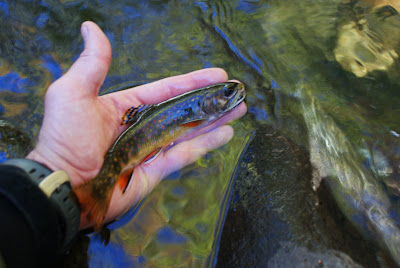 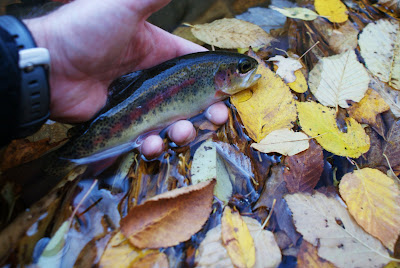 From this landmark on the stream it is nearly a two-hour hike back to the trailhead. This is not a section of stream to hike into for an afternoon of fishing, particularly with the short fall days. 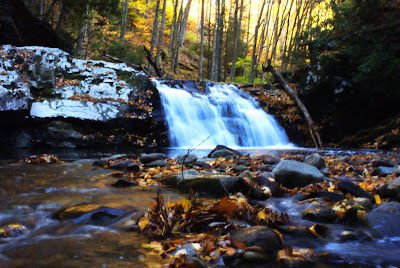 It was another great evening in the cabin sharing the days fishing trips. Again, it was an early evening with plans to get up and get on the road and water the next morning.
The decision was to hit my other favorite stream in the state, but hitting the upper end.
This stream is also a limestone fines supported stream, with the fines purchased by our TU chapter. The upper end of this stream is known to produce higher numbers where the lower, canyon end is known for size.

The fishing started slow, picking up only a few small brookies. 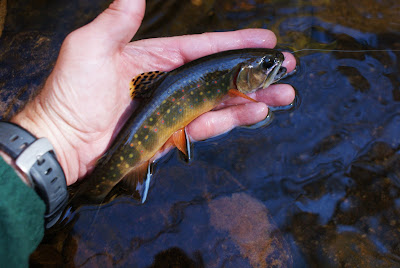 I finally figured out why we were picking up only smaller fish. My partner pointed out a large female on redds, that he said was over 12".
I started taking my time moving about the stream, looking for the paired up brookies. I wish I had a polarized filter on my video camera. I was able to video this pair, but the glare on the water makes it difficult to see - look for the white edges on the pectoral and pelvic fins.
I was finally able to entice this nice fish to the surface in a pocket that was in the direct sunlight. Maybe the warming rays of sun had warmed the water in his pool. 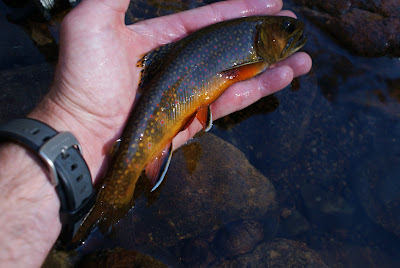 Regardless, it was the only decent brookie I would pick up on the day...another wonderful fall weekend in West Virginia!
Chris
Posted by Chris S. at 8:18 AM 4 comments: