It's been over three months since I have returned from my trip to Colorado and I have not wet a line since. Between my personal life, professional career, and an unusually wet fall; it has been a long drought.

Picking up where I left off in Part 2...After fishing what may have been one of my favorite western streams anywhere, I took a couple of days off from fishing. I dropped my partner off at the Denver airport and my younger brother and I took in a Rockies game. I wanted a day of rest before taking another day off from fishing to hike a 7.5-mile Colorado 14er loop which included Mt. Democrat (14,148'), Mt. Cameron (14,238'), and Mt. Lincoln (14,286'). I will try to get that entry on my other neglected blog - Terra firma.

Following successfully adding three new 14ers to my personal list, I met my younger brother in Silverthorne for the drive west to Flat Tops Wilderness Area. This area has been on my radar for a while now and this trip was all about searching for big cutties. 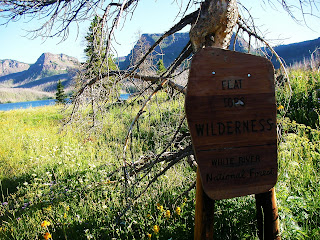 There's no easy (or short) way to get to Trappers Lake but it was well worth the drive! Once arriving we set up camp with just enough daylight to catch the evening hatch at the Trappers Lake tail out. I immediately spotted a riser, gave my younger brother an 18 EHC to tie on, and watched him land this beautiful male Colorado River cuttie on the first or second drift. 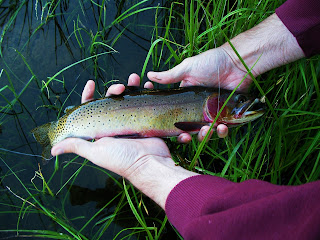 I watched my younger brother pick up a couple more nice Colorado River cutties while I left the water smelling of skunk. What makes this worse is that he only fishes when I come out.

We had a nice fire and a nice (freeze-dried) dinner before turning in for a cold August night in the Flat Tops.

I woke up before the sun started peaking over the eastern peaks and I awoke to frost. When I checked the temperature readout in the vehicle it read 32 degrees. I slept fine in multiple layers with 35-degree sleeping bag and a silk bag liner. I'm not quite sure how my brother slept, he had on only shorts and a hoodie in his 50-degree bag! I offered the silk bag liner but he refused - that's tough!

After a nice, hot cup of java it was off toward Coffin Lake and Little Trappers Lake. The early morning made for calm water as we rounded Trappers. 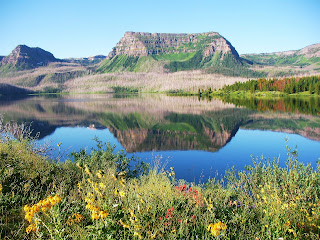 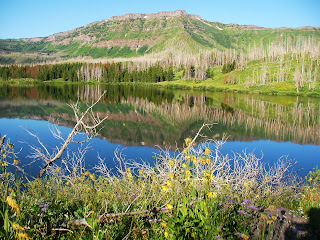 We made our way to Coffin Lake with anticipation and intel there were cutties in there over 20". We walked all the way around the small lake and we saw zero cruisers. I am new to this flat water stuff and  didn't feel like prospecting for deeper fish, so we checked the GPS, and made the decision to head on up to Little Trappers.

We fished the tail out of Little Trappers and we both missed a few fish in the small stream. Once we fished our way to the lake we decided to hike around to the feeder stream - neither of us care for the flat water.

We both struck out in Little Trappers, so we made another executive decision to head back down to Trappers Lake tail out stream. The late runoff also made for a late "spring" in the high country. I was amazed at the number of colors around Little Trappers. 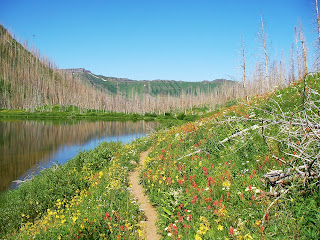 I really like moving water! Over the next hour or so, I picked up several of the largest Colorado River cutts I have ever landed. 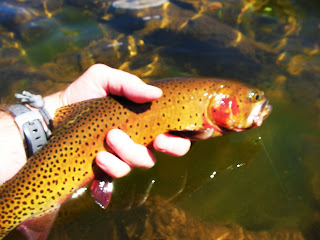 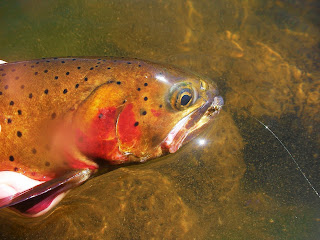 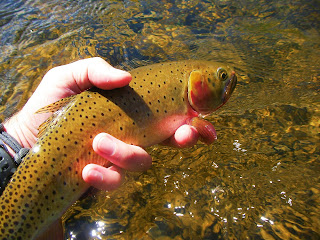 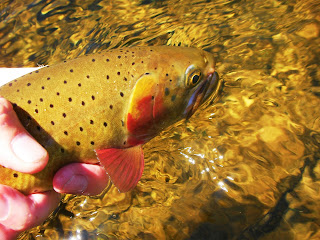 After a quick flurry of nice Colorado River cutties, it was time to pack up camp and a 5-hour drive back to Denver. I would spend the night at my brother's place with plans to get up at 4:30 AM and be at Roaring River trailhead by sunrise.

I've fished the Roaring River several times, up to 10K feet, and have always wanted to make it up to Lawn Lake in search of bigger greenbacks. After reading a report from my friend at Native Trout Angler when he visited Big Crystal Lake in 2010, I knew I had to go even higher!

I was at the trailhead and heading up solo by 6:15 AM. I passed several familiar sections of stream before I finally hit a a switchback and started climbing away from the stream. The stream makes a sharp westward turn here: 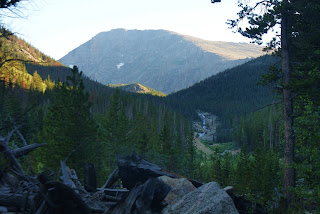 At a little over six miles, I arrived at Lawn Lake. 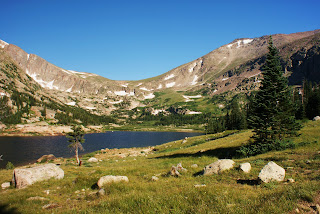 Although Lawn Lake looked very appealing, my destination was another two miles up - just below the saddle in the above photo.
Just above Lawn Lake I found more evidence of the heavy snow pack for the year. 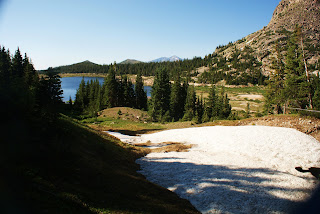 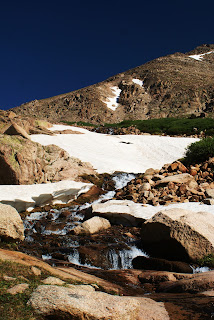 ﻿
After about eight miles and about three hours of hiking, I made it to Little Crystal (dead?)... 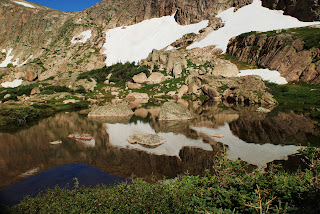 ﻿...then a short distance later I found myself at the tail-out of Big Crystal. 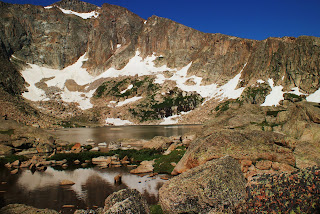 What I found there was exactly what DaveB had told me and what he reported in his blog - greenbacks easily over 20+ "!  Unfortunately, they were still spawning so I put the rod down and spent the next hour photographing and filming these guys.
This pair of spawning greenbacks were easily over 20"! 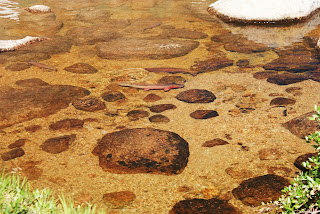 The colors on some of these fish were absolutely amazing - blaze red, fluorescent orange, and the photos do not do these fish justice. This guy was an amazing red! 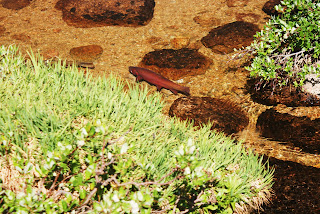 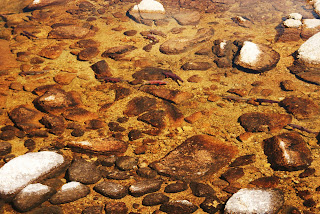 I also took several video clips of this amazing scene:
This pair (the same pair in the first photo above) may not appear that large, but I was almost ten feet directly above them. Again, they were both easily over 20".
﻿
Finally, before I packed it in for the eight mile hike out, I snapped a few shots of these future 20" geenbacks. 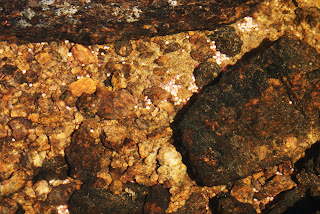 ﻿I decided I wasn't willing to hike over 16 miles and come up smelling like a skunk, so I would make a quick stop at Lawn Lake. This is a shot of Lawn Lake from the Crystal Lakes area: 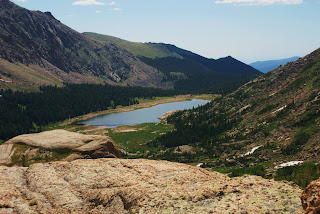 By the time I had made it back down to Lawn Lake, the early calm winds had been replaced by the howling strong winds of high, flat water﻿ - making casting difficult. When the winds would die down, I could see cruising cutties and I could see that they were not spawning.
I finally picked up a nicely colored (appeared to be recently spawned out) greenback. 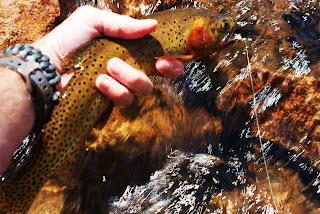 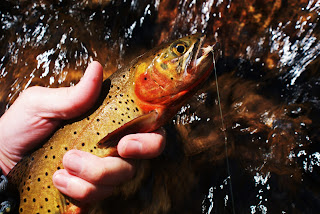 And finally, this smaller greenback, which may have been the most beautiful greenback I have ever caught. 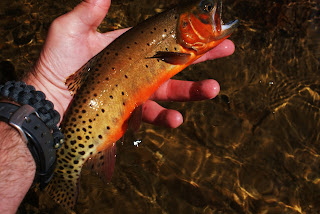 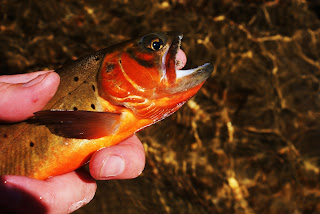 After removing the stench of the skunk, I made the decision to pack it in for the remaining six-mile hike out.﻿ I made it back to the trailhead a little over eight hours after I started; with over 16 miles hiked, and only two greenbacks landed - but this day hike was much more than that.
I had 2-3 more days planned, but when I set up camp later that evening on the west side of the park I called to check in, and got the most devastating news of my life! Needless to say, I didn't finish the trip I had planned but I finished the 2011 Colorado adventure with an amazing fish and an amazing hike!
P.S. Although I have not picked up a rod since I left Colorado (almost four months) my life is in a much better place than when I visited Colorado. I look forward to sharing my Search for Native Salmonids in 2012 with a very special person!
Chris
Posted by Chris S. at 9:56 AM 2 comments: