Alvord Cutthroat - A Call for Action

As anybody who has followed my blog knows, not only do I post my adventures in search of native salmonids I also use this blog as a platform to raise awareness on the efforts to restore some of these native species.

This is another opportunity to voice your support of an improvement effort. This time it is for the "extinct" Alvord cutthroat. My friend Gary Marston of Native Trout Fly Fishing made me aware of this effort a couple of weeks ago and today he sent me this information.

This is a phenotypical Alvord specimen Gary caught (borrowed from his website): 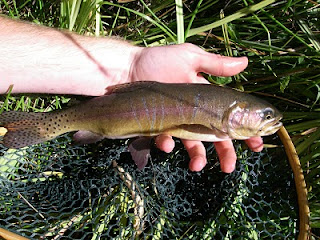 The Alvord cutthroat has been declared extinct for most of the past century, however in one small creek in Southern Oregon there is still a remnant of these fish left. Although it is unclear how genetically pure the fish in this creek are, some are phenotypically correct representations of the Alvord cutthroat trout and this may be the last chance to save these fish from extinction. The problem is that closely related Lahontan cutthroat have also been stocked in the creek and the greatly out number the Alvord type fish and seem to be slowly but surely replacing the Alvord type fish. For more information of these fish, please visit http://kortumofdiscovery.wordpress.com/ or http://www.nativetroutflyfishing.com/alvordcutthroat.htm.

I fished this small creek on August 1, 2010 and did not land one of these phenotypical Alvords but my partner did. All I caught were the introduced Lahontan cutthroat. 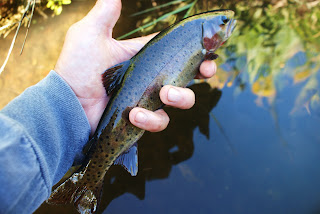 I want another shot at them and we need to ensure they survive/thrive for me (and possibly my son) to add them to my life list.

Here is some information on current efforts and what you can do to voice your support:

A number of “challenges” attempt to inhibit ODFW SE Oregon Fish Biologists—at least where the Alvords are concerned. They have a lot on their plate, and much of it essentially mandated. At this point, the alvordensis phenotype consideration is completely volitional. The remaining known streams in the Alvord Basin that can support trout have had Willow/Whitehorse Cutthroat Trout translocated to them. Other streams might be “salvageable” if riparian zone work was accomplished, and perhaps beaver reintroduced into those streams. There also seems to be an expectation that they cannot get funding for a project without genetic “proof” that these are alvordensis. Of course, this inevitably leads to the complications Dr. Behnke predicted. Like many native trout enthusiasts, we hope that action will be accomplished before it is too late…

There’s a fair amount of “mystery” involved in this situation—and some have interpreted this into skepticism. The “true believers” tend to be those that have spent some time on the stream and have experienced the trout first hand—with an observant perspective of inquiry: “what is this?” and “where did it come from?” Common sense would lead one to comprehend that there are a finite number of explanations—and what Dr. Behnke has put forward indeed is the most likely explanation. Of course; none of us would have any traction without the authority and statements published by Dr. Behnke…

There’s more we may chat about in the future providing that time and circumstances permit… We’d be interested to know the level of genetic studies that you may have undertaken in the pursuit of your fisheries biology degree (there’s some background that brings this question to mind). I’ve been looking into the prospect of furthering ichthyologic biology and genetic studies simply because it seems alarmingly evident that some genetic studies/conclusions are missing a broad element of common sense.

Currently there is a “waiting game” underway—Mary Peacock of UNR ostensibly waiting for funding from the US Fish & Wildlife Service before she undertakes the project to look at the dozens of pre-hybridization specimens, along with the more recent specimens. More could be said about this than time permits—but this is the course of “action” that TU seemed to consider logical; and partly, for lack of funding, has gone on and on. There are samples from 2004 and 2008 that may be appropriate to analyze along with the select few from 2010—but, we personally have notable concern regarding whether genuine objectivity will be applied in the thought processes involved.

As you may know; Dr. Behnke has already pretty well spelled-out reality: “The best advice I can give I borrow from Peter Larkin’s keynote address to AFS many years ago: “Simplify, simplify, simplify”. The goal is to create a population of trout phenotypically representative of the extinct alvordensis by selecting specimens from Guano Creek that most closely resemble alvordensis. These would be transplanted into presently fishless waters. If all of the proposed actions, especially “genetic testing”, were attempted to be carried out with all of the associated planning and funding, I doubt the goal will ever be attained. It’s human nature to put off until tomorrow what could and should be done today. Accept that Guano Creek trout are not pure, but retain the hereditary basis to phenotypically duplicate alvordensis. What can more and more genetic analysis tell us except that the present population is most likely the product of more than one parental population?”

Little has changed in the five years since 2006, except that remaining Alvord phenotypes may still be on the decline. Last summer, when sampling the creek—with Shannon, her field assistant, Trout Unlimited personnel, an OSU Fisheries Professor and Patrick Trotter; eleven of fifty-five trout were logged as Alvord phenotypes (for a 20% or 1:5 ratio). In reality, that number was exceptionally high. The real number of respectable Alvord phenotypes is almost certainly a notably lower percentage, and the more time that goes on, the more likely it is that there will be greater difficulty in securing meaningful phenotypes for preservation of Alvord characteristics for future generations to experience and appreciate.

Writing a positive and encouraging letter of support to Shannon would be a good thing. We believe that as well as being a tool she can utilize in requesting grant funding from the Western Native Trout Initiative, etc; she also could use positive encouragement herself in this regard.

A letter of support might ideally include the mention of a number of considerations:


Please submit letters of support for an Alvord phenotype rescue and restoration project to: Shannon Hurn, ODFW District Office, 237 Highway 20 South/PO Box 8, Hines, OR 97738 or via email to shannon.m.hurn@state.or.us

The long winter is nearing completion. Tomorrow is the first day of spring and my first planned fishing trip is less than three weeks away. I plan to kick off the season with the annual trip to the Elkhorn Clean-up then heading further south for our annual father/son trip to the Smokies.

I was able to get out once over the winter, with a quick trip to new water with an old friend. Due to my transfer and my friend's house building, we were unable to hook up in 2010. Last month, following the West Virginia winter meeting of TU State Council, we headed east about 45 minutes to new water for me. With heavy runoff and heavy flows, there were no trout harmed on this quick trip but it was definitely nice to just get out on the water. 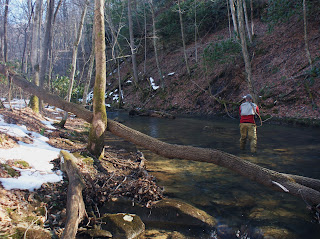 The winter hasn't been a complete loss, I've been acquiring gear for the upcoming season. In addition to my son's first pair of waders and his first backpack, I also purchased a dozen unique flies from Ben of Arizona Wanderings blog. He calls them mini-hoppers and I can't wait to give them a try on some wild trout waters of the Smokies. 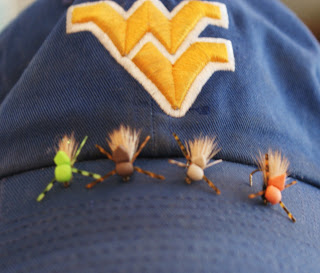 Here's to another great year in search of native salmonids.