I started planning my 2014 trip to Colorado not long after the 2013 trip was in the books.

The 2014 trip would be another backcountry adventure with my host/guide from the previous year but this trip would also include a couple of added side trips - serious side trips!

I landed in Denver early in the AM and after a few quick stops for supplies, I was headed to RMNP. On the agenda was a day trip to a lake that has been on my list since the very first time I drove across Trail Ridge Road. 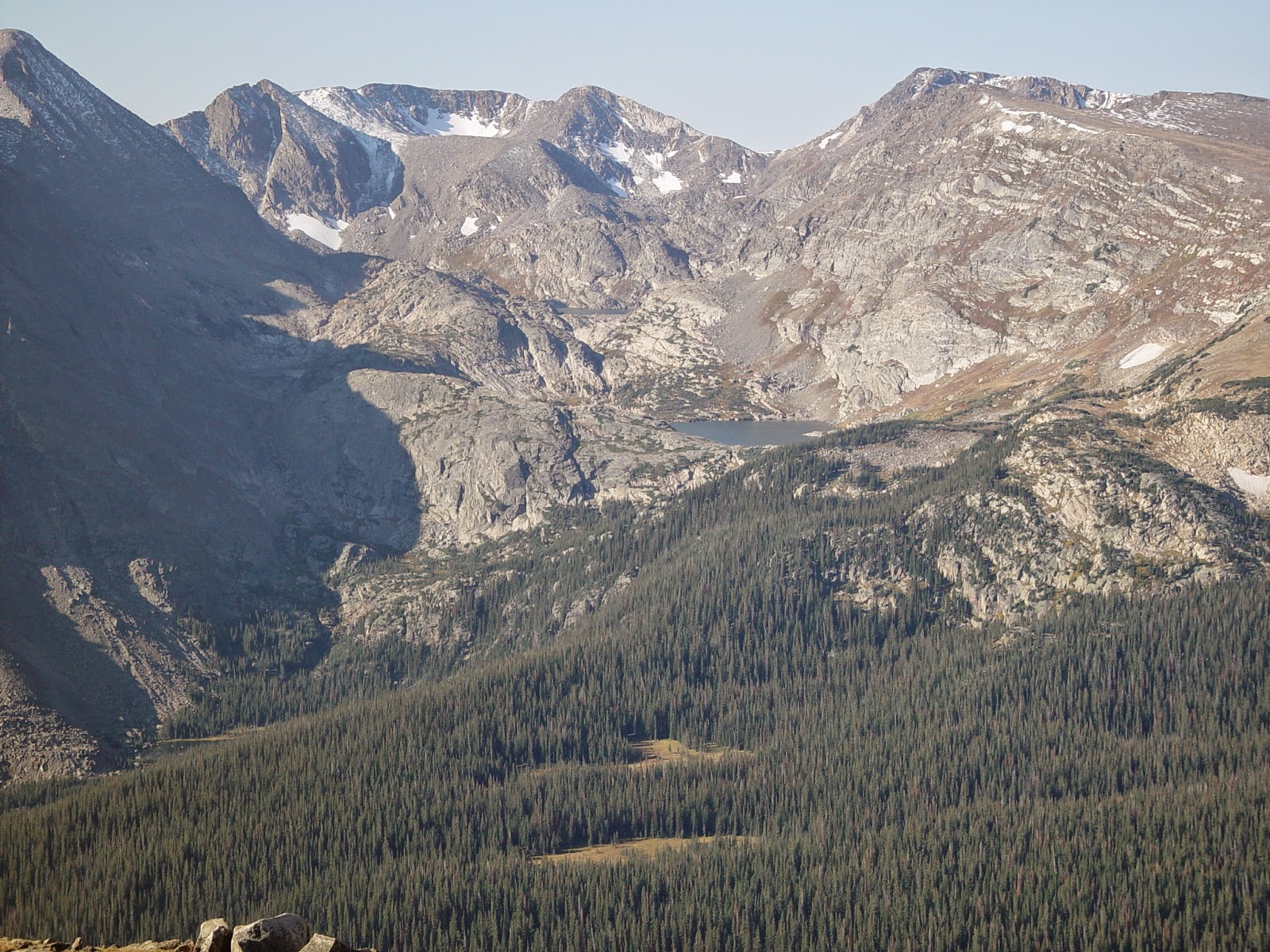 I was planning on using Timber Creek campground as my base camp, so I took Trail Ridge Road to the west side so that I could get a good look at my destination - again.

As I neared the Forest Canyon overlook, I ran into an elk jam. I've seen hundreds of elk in my travels, so I would prefer to just keep moving, but that is not always a choice. After the elk crossed, traffic started moving again, until I got to the exact location where I took the above photo, and traffic stopped again.

When I saw what had caused this traffic jam, I immediately went into tourist mode. It was my "white whale" of RMNP, mature bighorn rams! 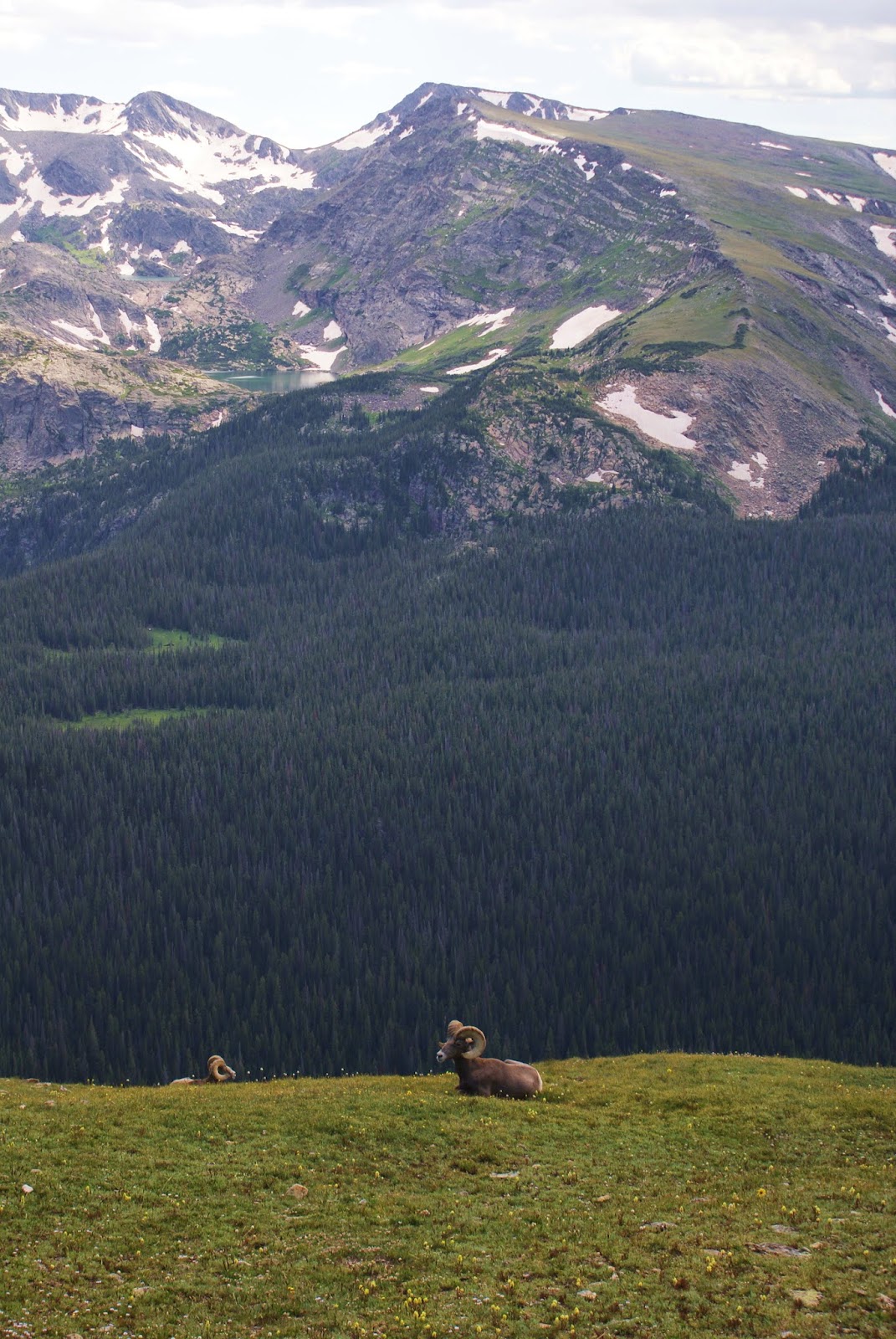 I snapped off several photos and took another look at my route for the following day, the ridgeline in the upper right of the photo would be the off-trail portion of my trek.

I stopped at the Continental Divide and the Mt.Ida trailhead to scope out the first mile or so of trail. Since I would be going in before daylight, I wanted to make sure I knew where I was going. I didn't want to miss the trail to Mt. Ida and end up at Trail Ridge Visitor's Center. I also wanted to get above treeline for a little acclimatization.

After a mile or two of hiking, I found myself above treeline and a good spot to turn around. This rock outcropping was home to a family of marmots and this guy had the perfect view of the west side of the park. 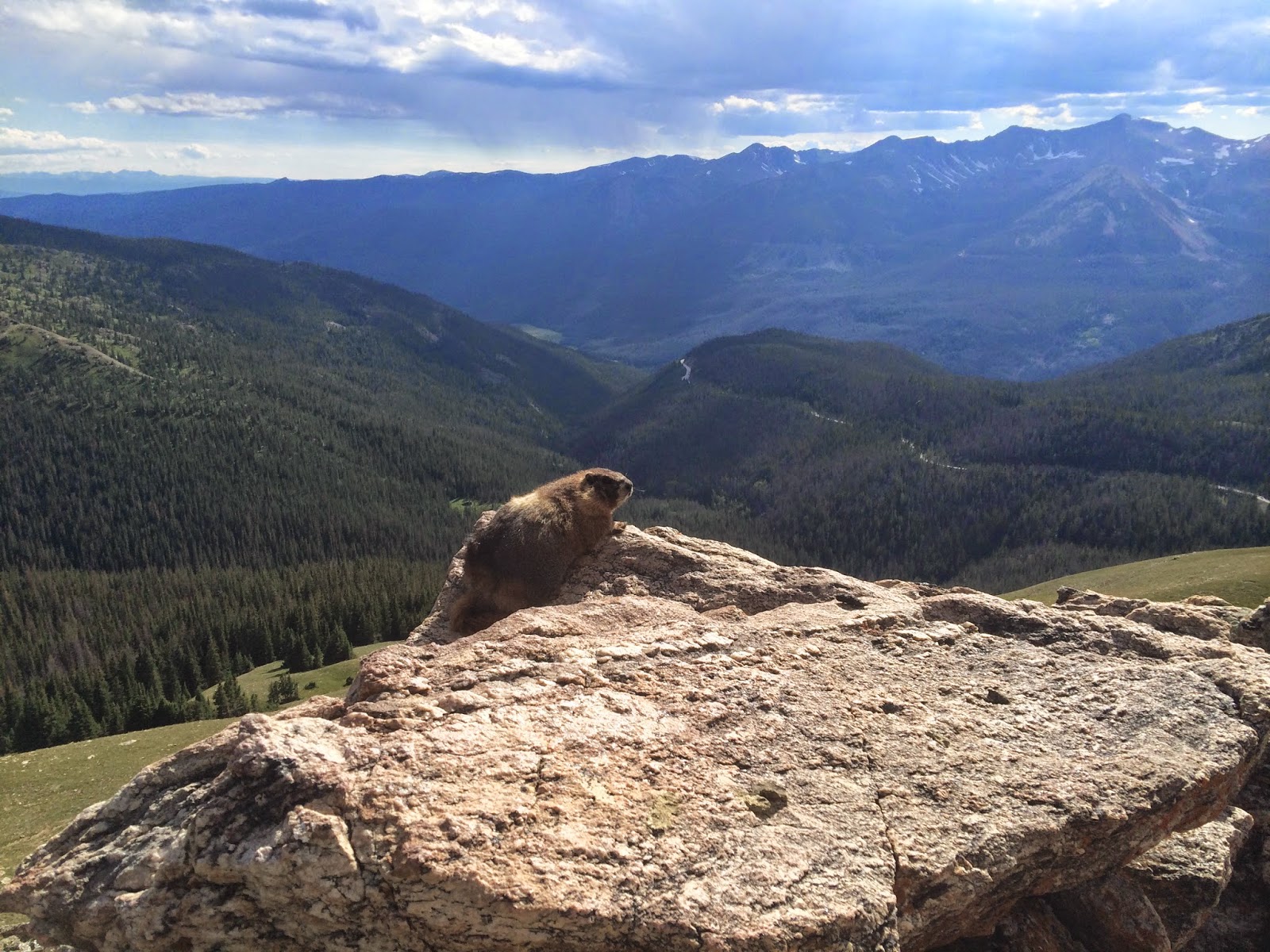 My legs felt great! I had been training for a half-marathon so I didn't expect any problems, but after the previous year's trip (5 hours to backpack the final 7 miles to 11,000 feet) I wasn't going to put myself in that position again. I've never had a problem with the altitude either, going from slightly above sea level to 10,000+ feet on the same day on multiple occasions. This day would be no different.

It was a nice warm-up hike for the full trip the following day. I also ran  into a father and son combination that were on their way out from the lake. They informed me they had not caught any fish. That didn't dampen my spirits because I was so impressed with the fact that his 8-year-old son had made that difficult hike.

Once I got down to the valley, I found something I had never dealt with before. Timber Creek campground was full. Even when the campground was partially closed for the bark beetle tree kill, it was never full. My next option was a hotel room in Granby, which wasn't a big deal, it would simply add another half-hour to the start of my day.

I found a room, arranged my gear for the day trip to follow, and I was asleep early (2-hour time difference).

I was at the trailhead well ahead of the sunrise and had made it to the divide ridge about sunrise - my favorite time! 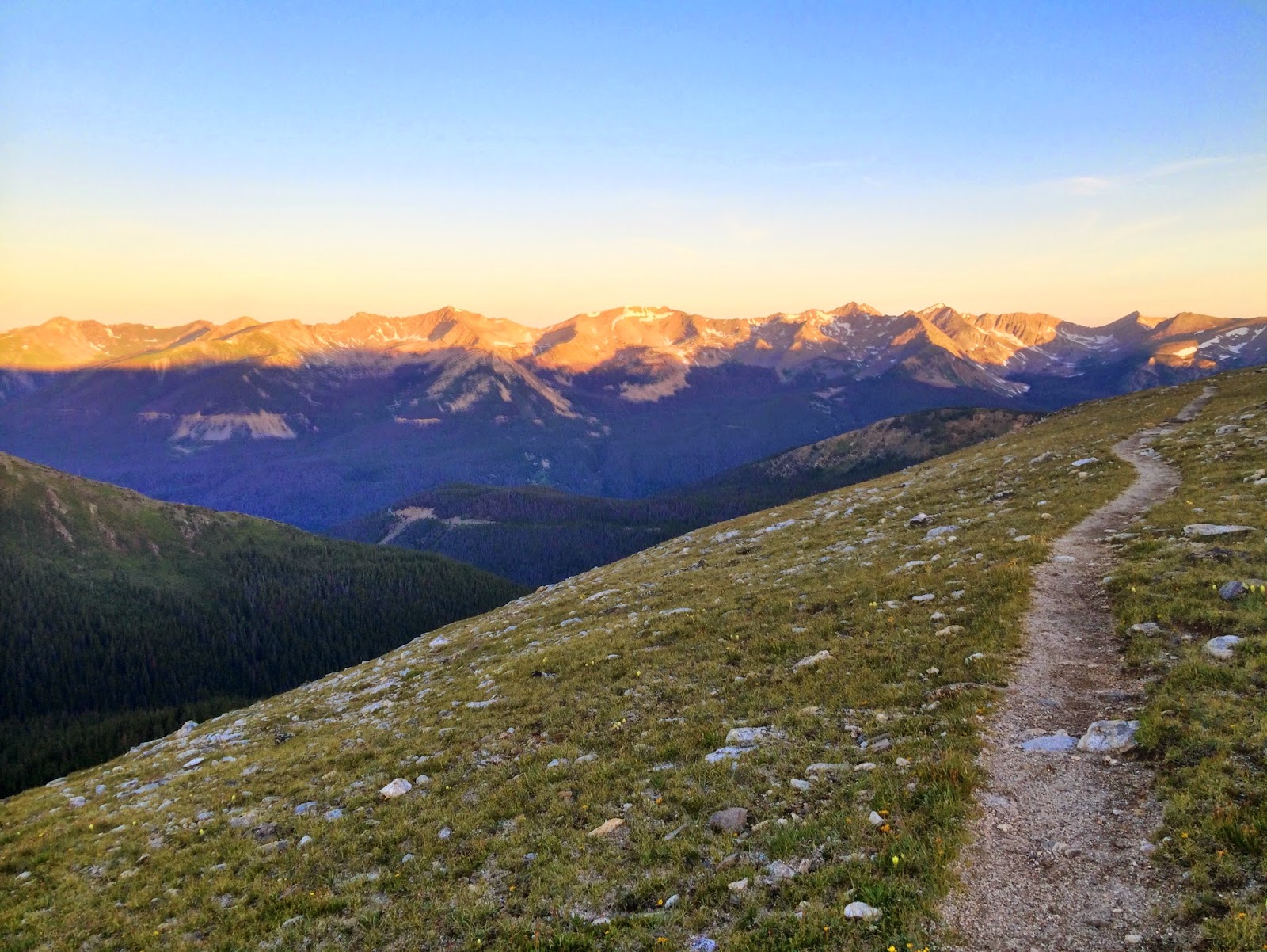 I even spooked a large group of bighorn ewes and juveniles. 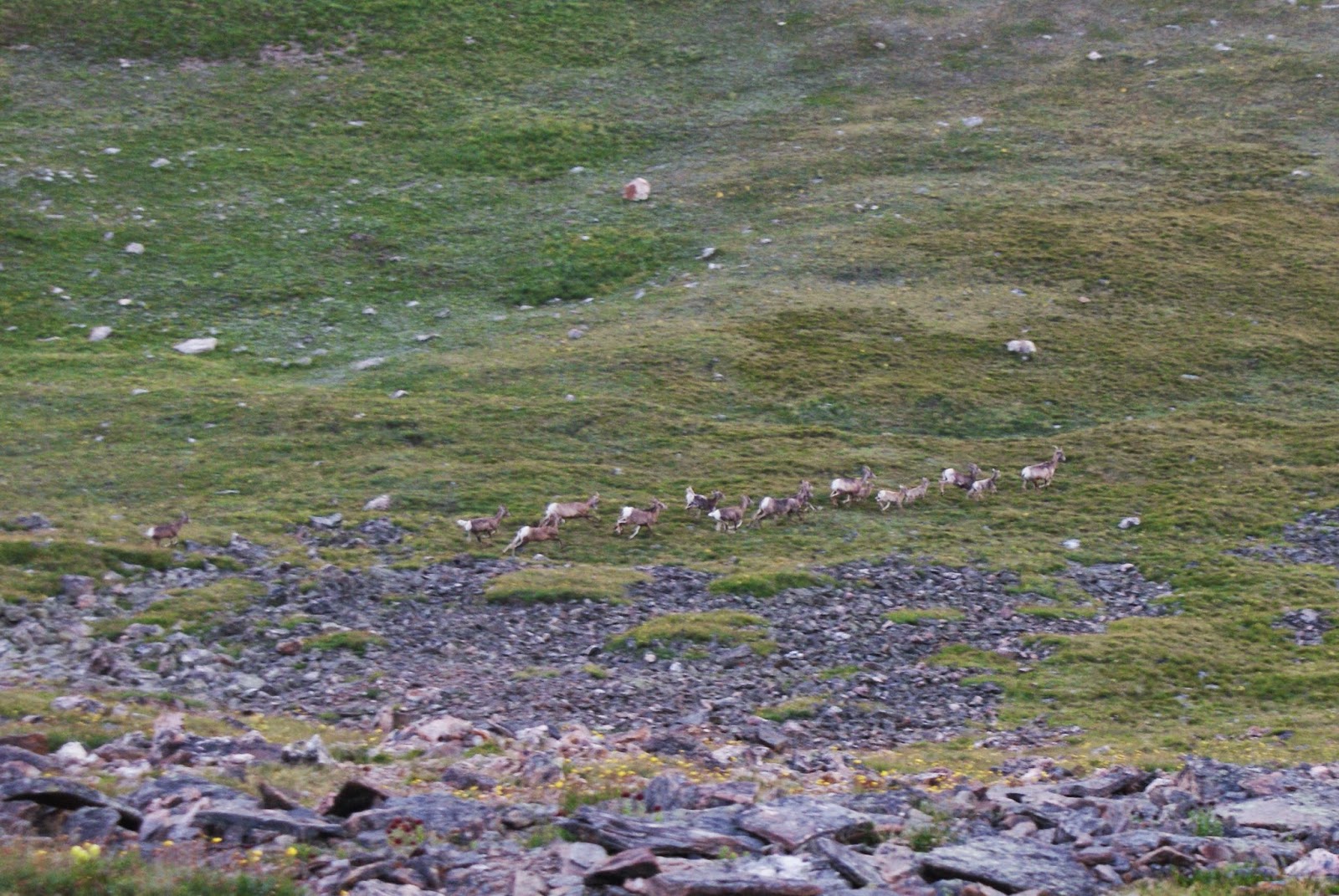 As the sun rose, the views continued to get better... 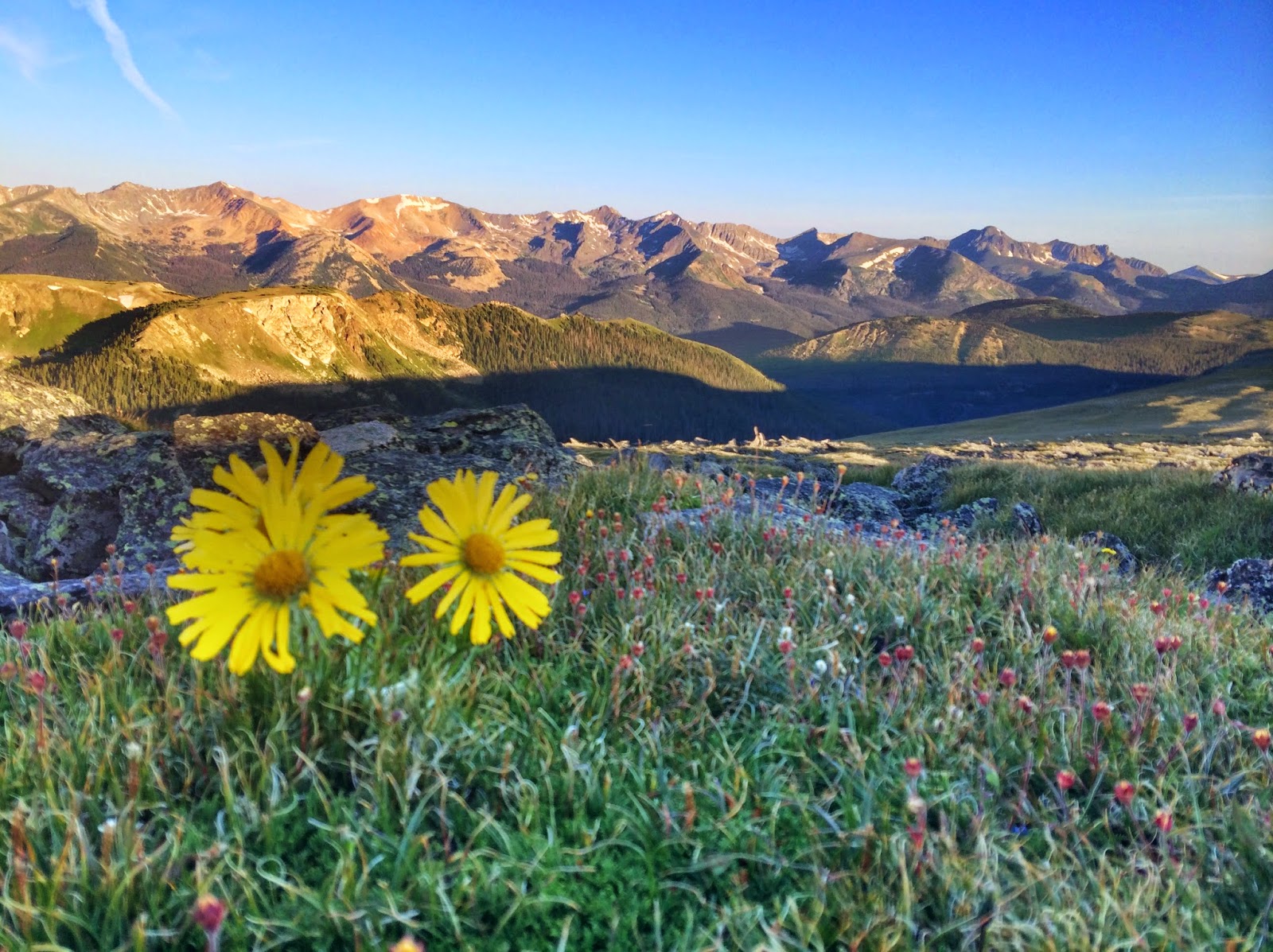 ...and another small group of bighorns. 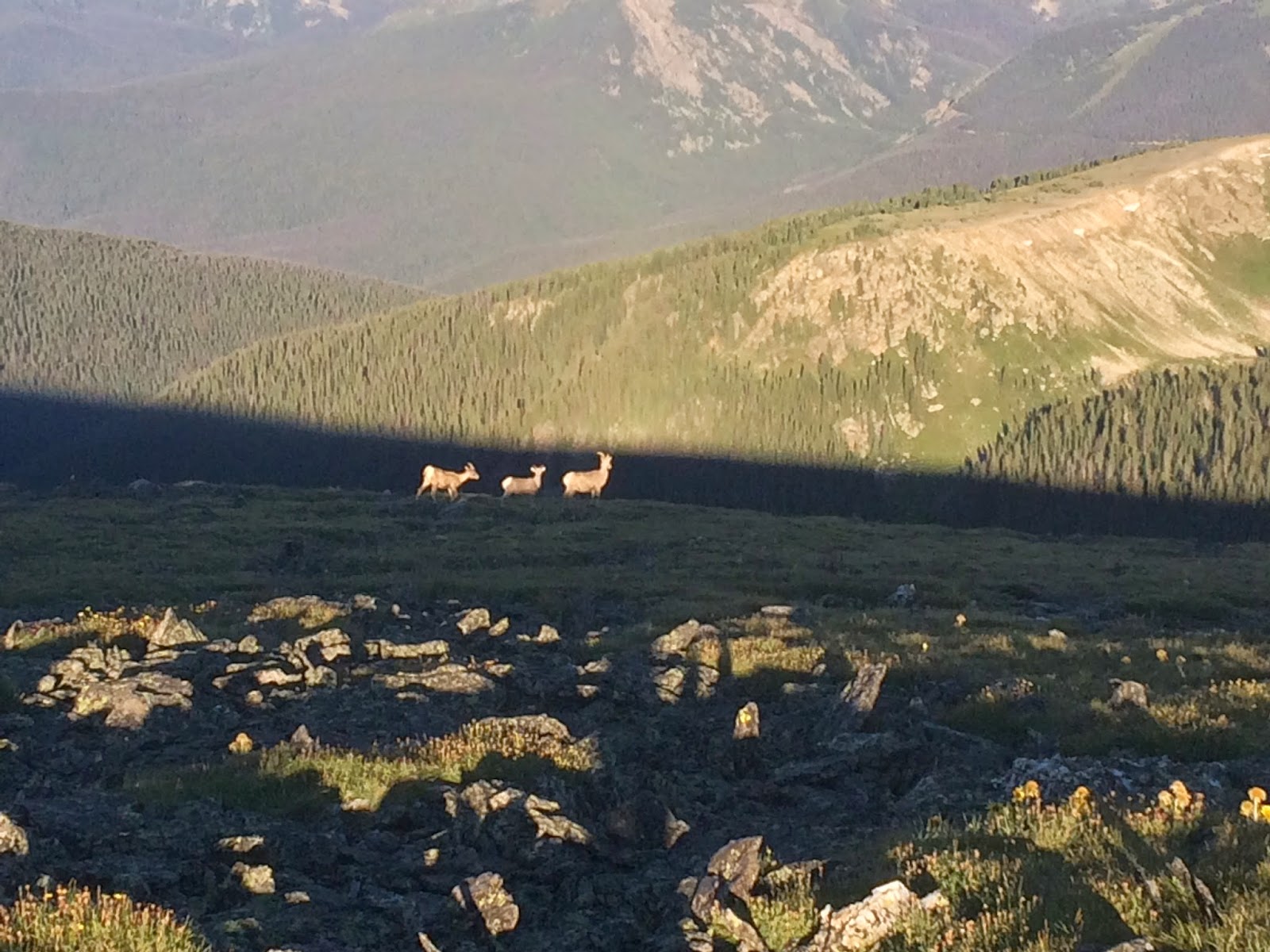 If the day continued to produce views like this, I might never make it to my final destination, so I pushed on (and up).

My directions were simple, climb to 12,000 feet on the Mt. Ida trail and hang a left. When I finally took a look at my GPS I had gone above the 12K mark, which wasn't a big deal. I'm not even sure it added any distance to my trip.

What the added elevation accomplished was to put me above these guys...the highlight of my trip! 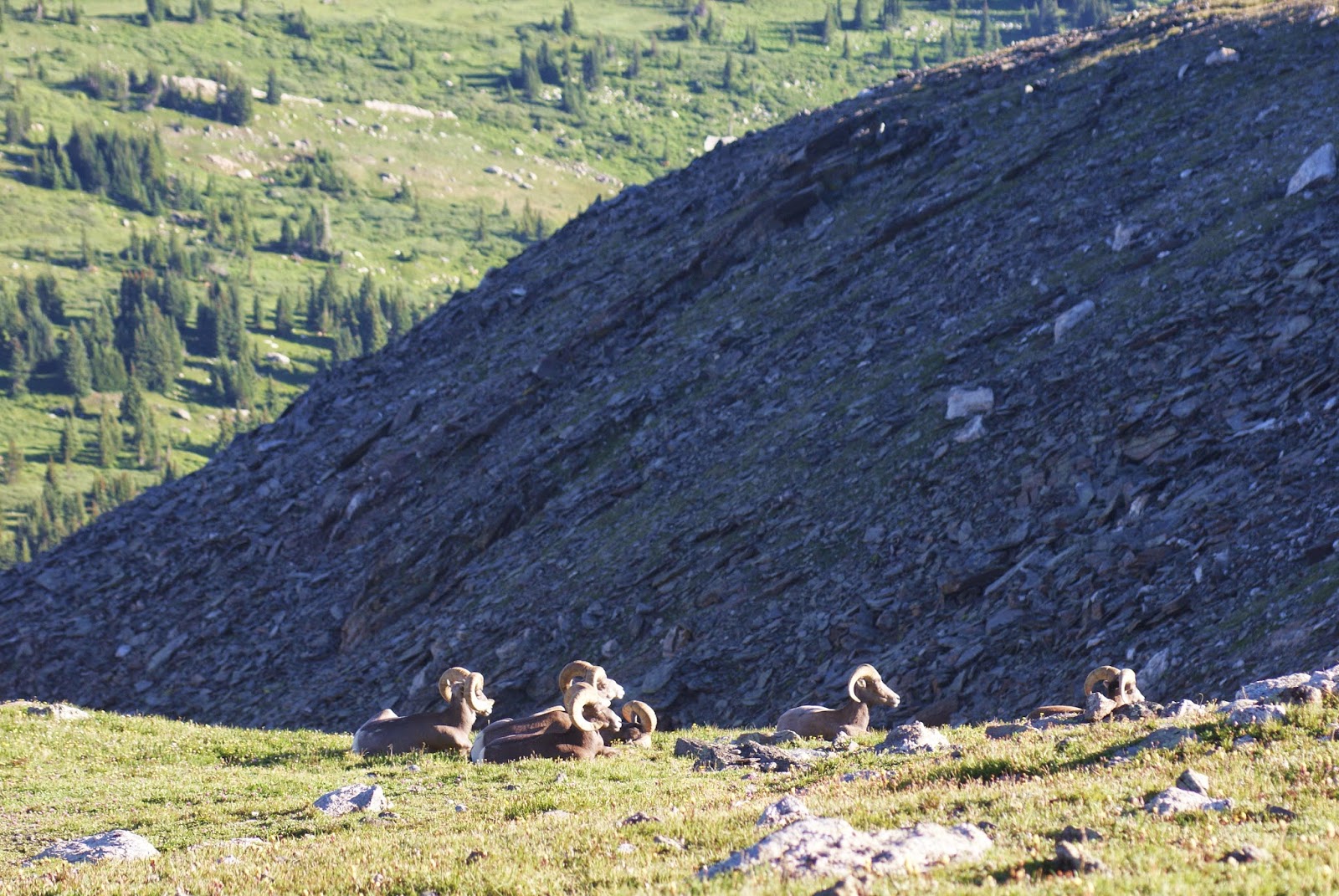 They even let me break out the telephoto and zoom in on them. Apparently, I'm no threat to them. 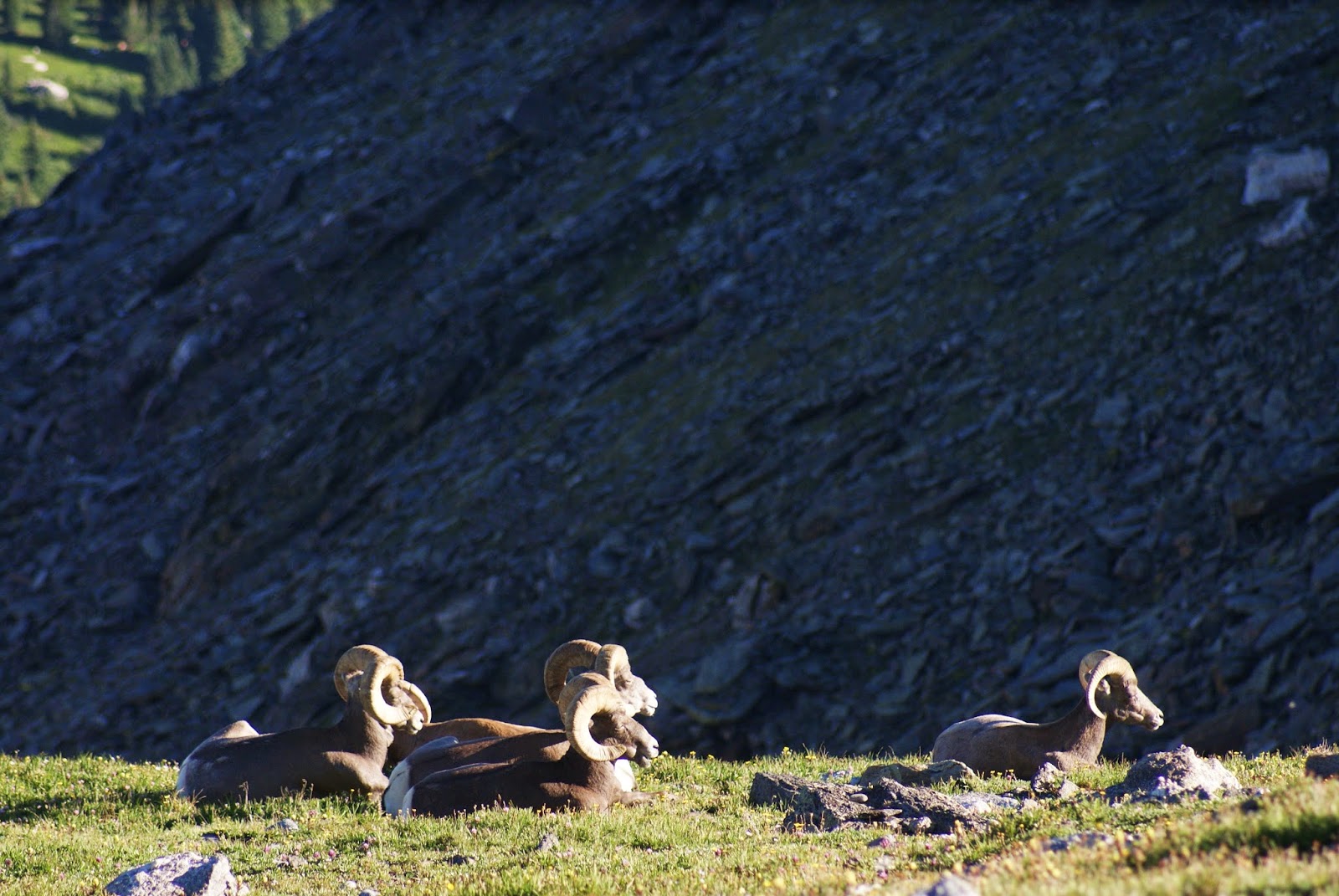 It was not until after I passed them that one of them decided to stand up and they were still not spooked. 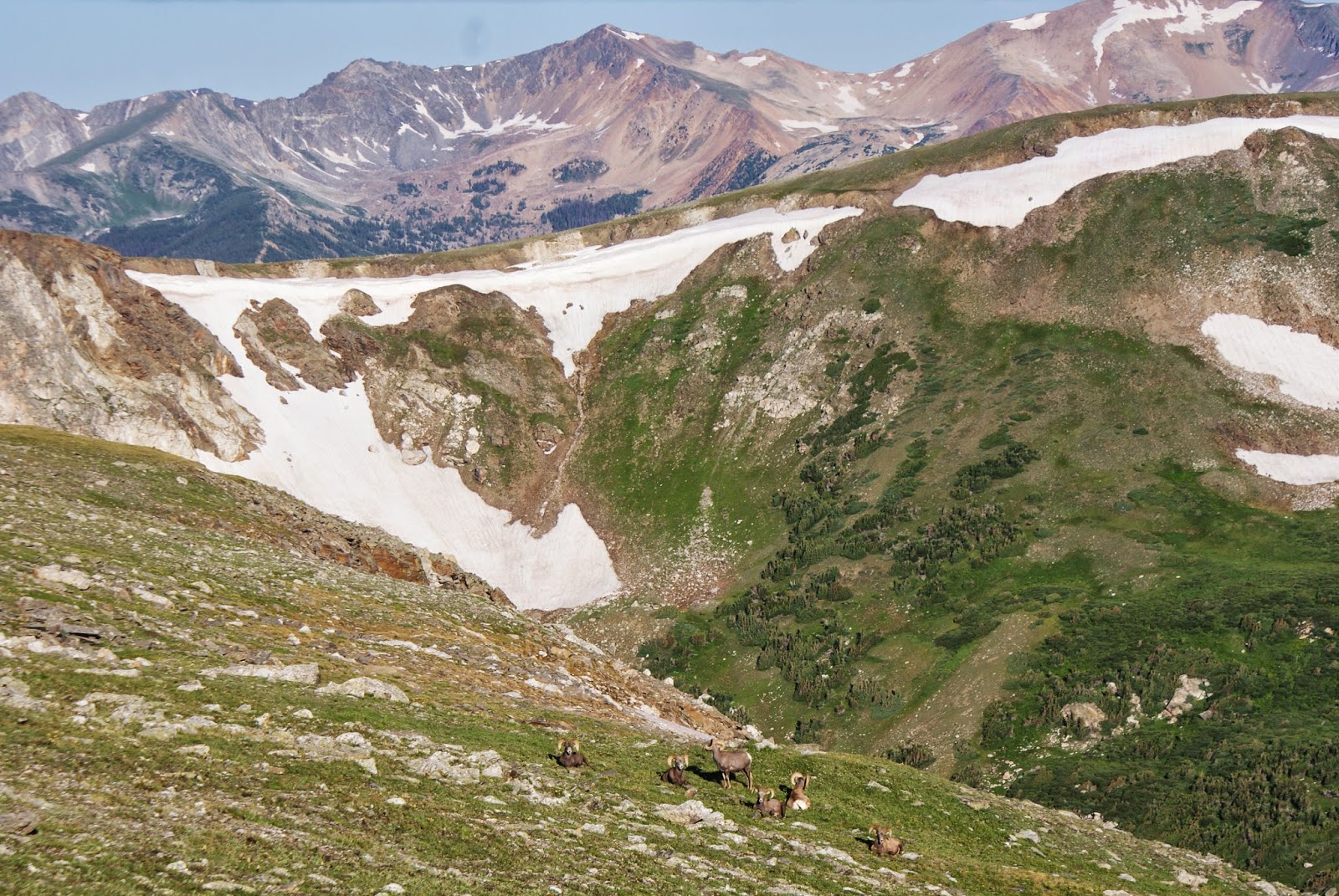 As I said before, I had never seen a mature bighorn ram before. I had been in Colorado less than a day and I had now encountered two groups of mature rams! What a trip so far, and I hadn't even made it to my first destination.

Speaking of my first destination, I would soon get my first look. It didn't seem that far away - if I wanted to go straight down. 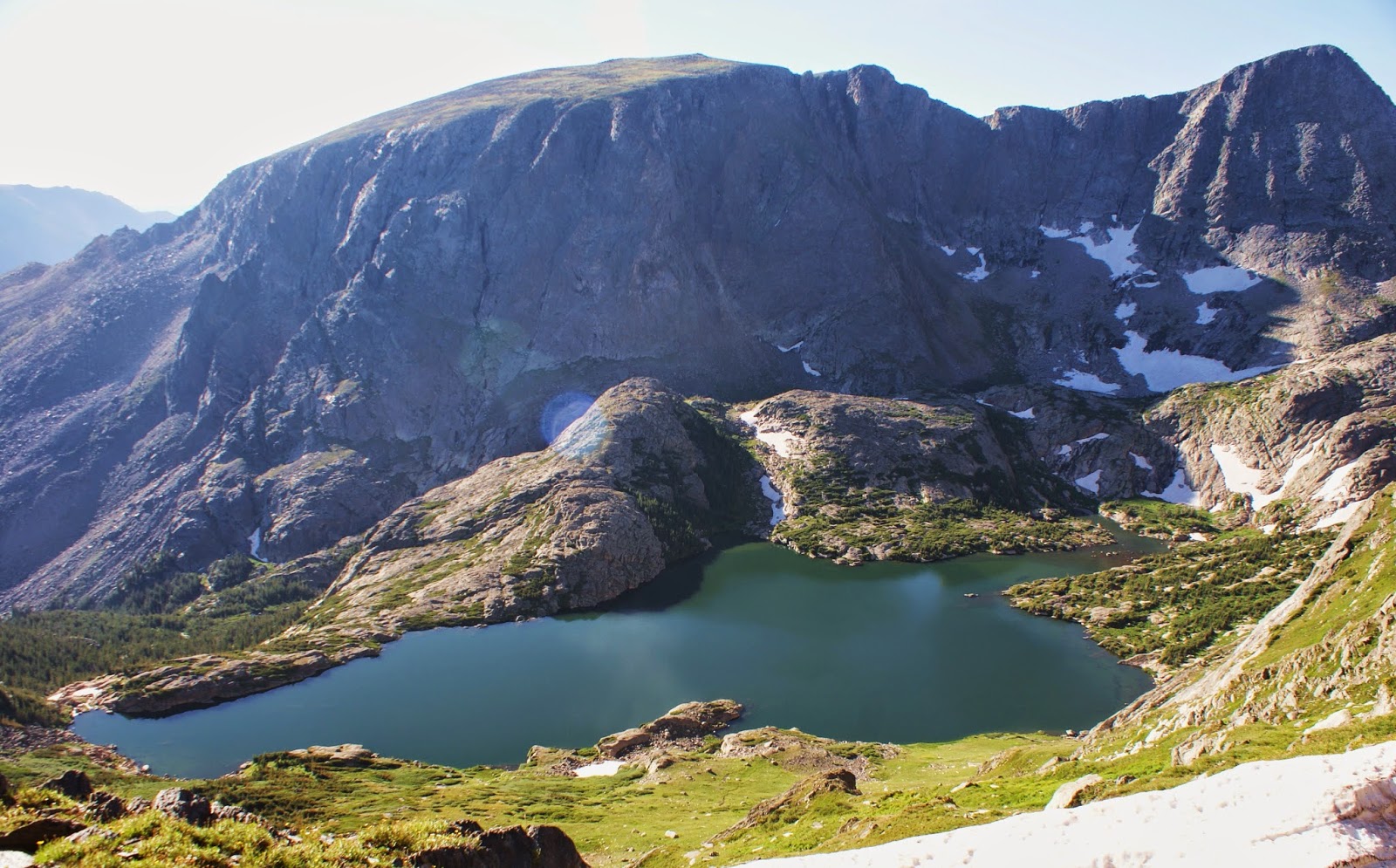 The directions said to follow the ridge down until I could find a good point to backtrack to the lake. That seemed simple enough, and it was as I came in above the smaller lake. 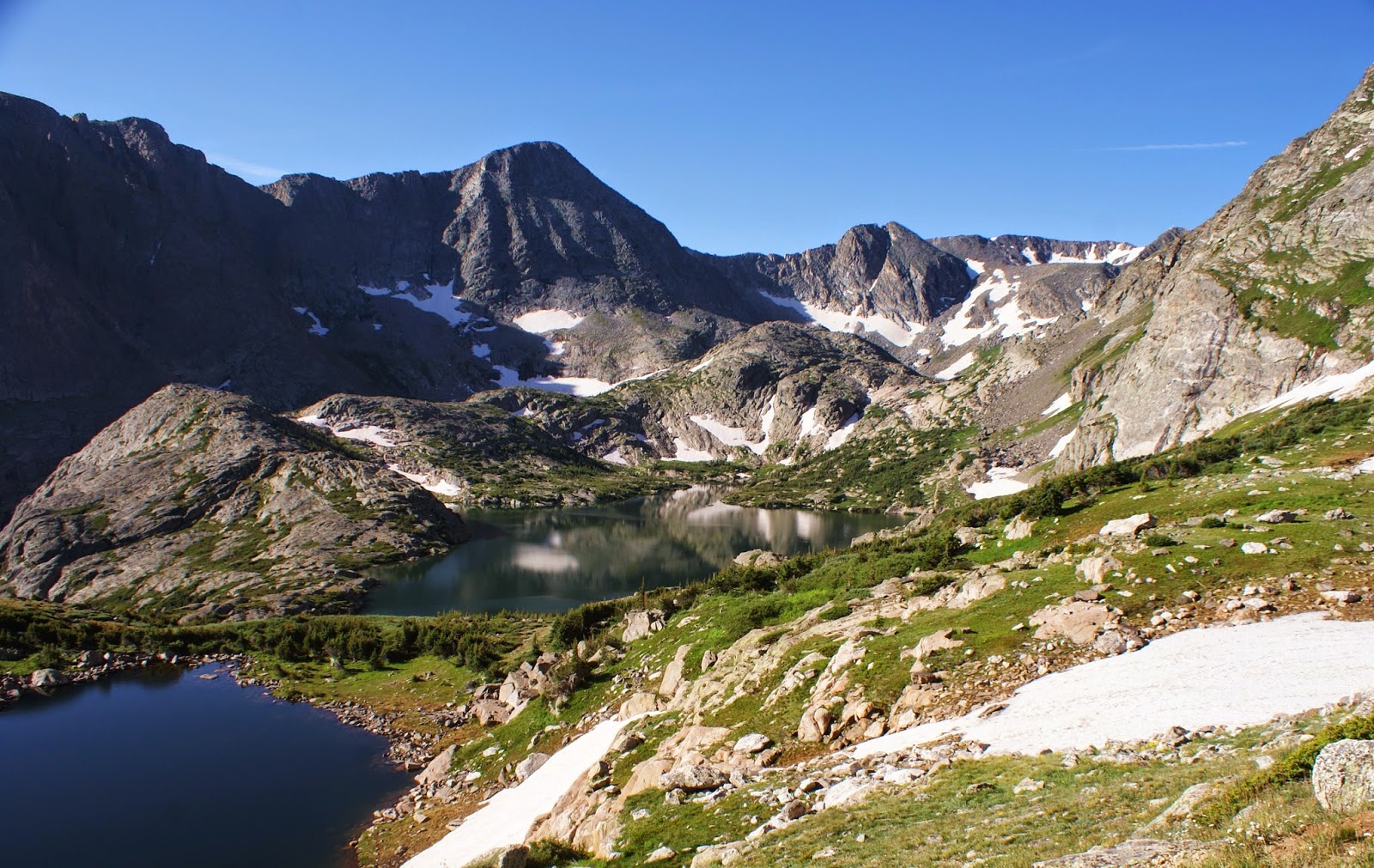 Up until this point it had been a fairly easy hike, even as I passed the first lake. It didn't get interesting until I started my final descent (maybe 100 yards) to the water. The area between the two lakes was covered by krummholz, which I think is German for "cuss a lot".

I did, however, make it to the water without incident. Once I found a nice large rock to rig up my fly rod, I spotted something across the lake that I wasn't prepared for - other fisherman! They appeared to be gearing up for the hike out. Regardless,even though the lake appeared small from 1,000 feet above, it was plenty big enough for all of us.

After rigging up, I started checking out the water for cruising fish. There were several cruisers and even a few risers. These cutthroat were, as advertised, larger than the average fish. These fish appeared to average about 16 inches and I soon found out they wanted nothing to do with the large, fuzzy fly I was tossing at them.

After the other group left, I made my way around to the outlet and tried my luck at some moving water, but the result was the same. I worked my way on around the lake and the high, rounded rock ledges on the south side of the lake. Again, the fish were rising and they wanted nothing to do with anything large and fuzzy.

Finally, I broke out the small flies and tied on a size 20 Griffith gnat and smaller (8X) tippet. This got their attention and I missed the first couple of takes as I was excited just to get their attention! I was able to hook 3-4 good size cutthroat but, I'm guessing, the old tippet material had rotted because every fish I hooked, I broke off.

I fished around the lake for about three hours before I made the decision to pack out. I had a long climb ahead of me and I wanted to be below treeline when the afternoon thunderstorms rolled through. Before I started out, I picked a good spot to have lunch and watch the cutties cruise by. 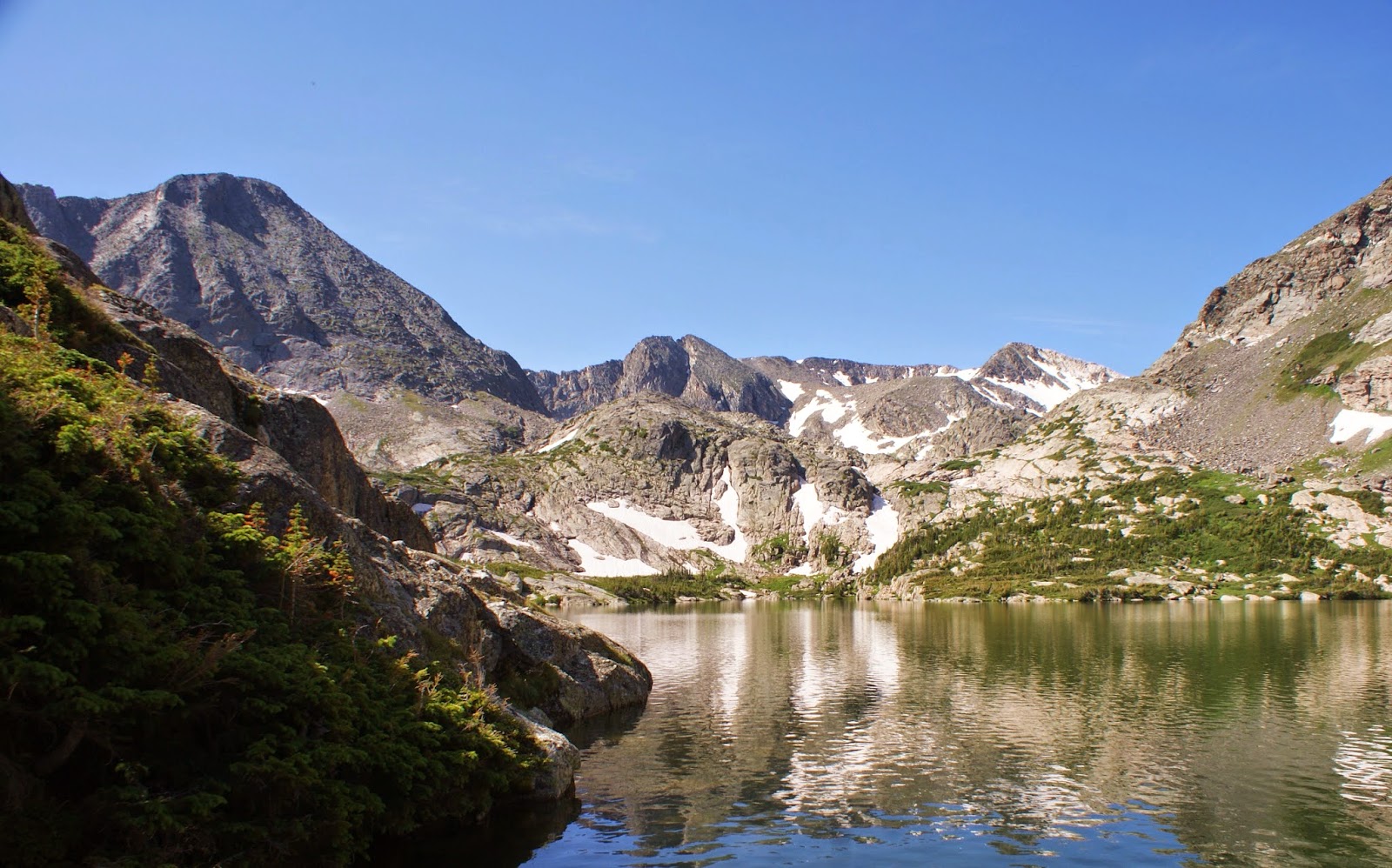 Leaving the lake, I followed the route of the other visitors and rock hopped up the outlet to the lake above. No way was I going to cuss my way through that krummholz again!

It was an easy climb to the next lake, but that was only the beginning as I had another serious climb to the ridgeline. I created my own switchbacks, took several quick "breathers" and before long I was bushwhacking my way across the tundra to the Mt. Ida trail.

As I neared the trail, something caught my attention. I heard a strange sound, it wasn't marmots, but I wasn't sure exactly what it was. Then I caught movement out of the corner of my eye, so I froze. I had walked up on a family of ptarmigan and the mother was calling out to her little ones. How many do you see? 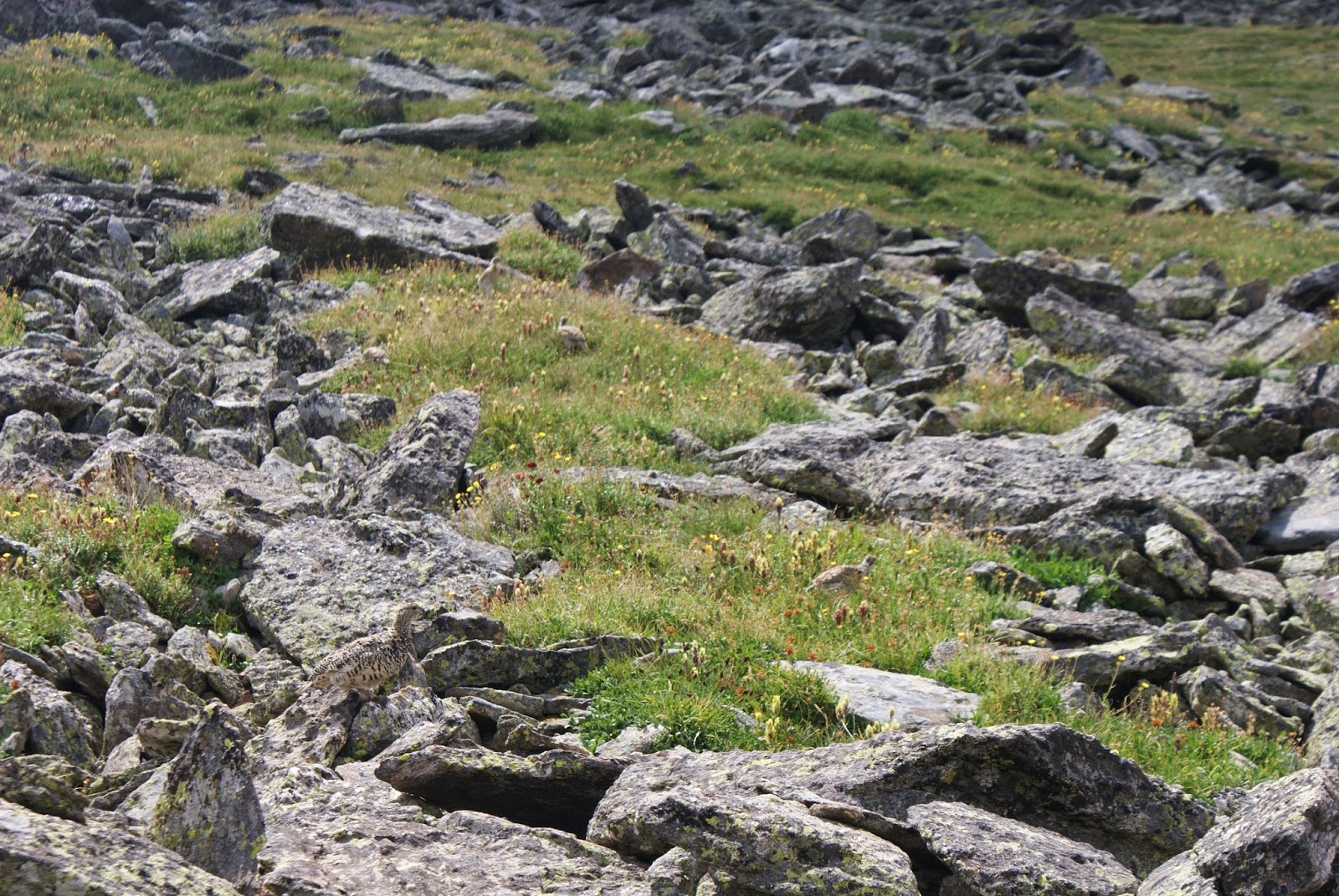 Finally, after roughly 12 miles of hiking I found myself back at the crowded trailhead - just as the afternoon storms started rolling through. I felt pretty good considering the elevation gains and the fact I did very little acclimatization. I wasn't even disappointed that I came out smelling of skunk, the scenery and the wildlife more than made up for it!

I had a very aggressive schedule planned out before I met up with my partner for the backpacking portion of my trip. I had planned a couple of 14ers on back-to-back days following the 12+ mile hike I had put in on day 2.

From this Mt. Ida trailhead, I drove to Leadville with plans to add a couple of 14ers to my list. I set up camp near the Mt. Massive trailhead and I didn't set an alarm. I figured I would let me body tell me when it was ready to start.

On queue, when it started getting light out, I was up and shortly thereafter I was on the trail headed to the top of the second highest peak in Colorado (I did number one in 2008). Seven miles and 4,500 feet elevation gain later, I was on the top... 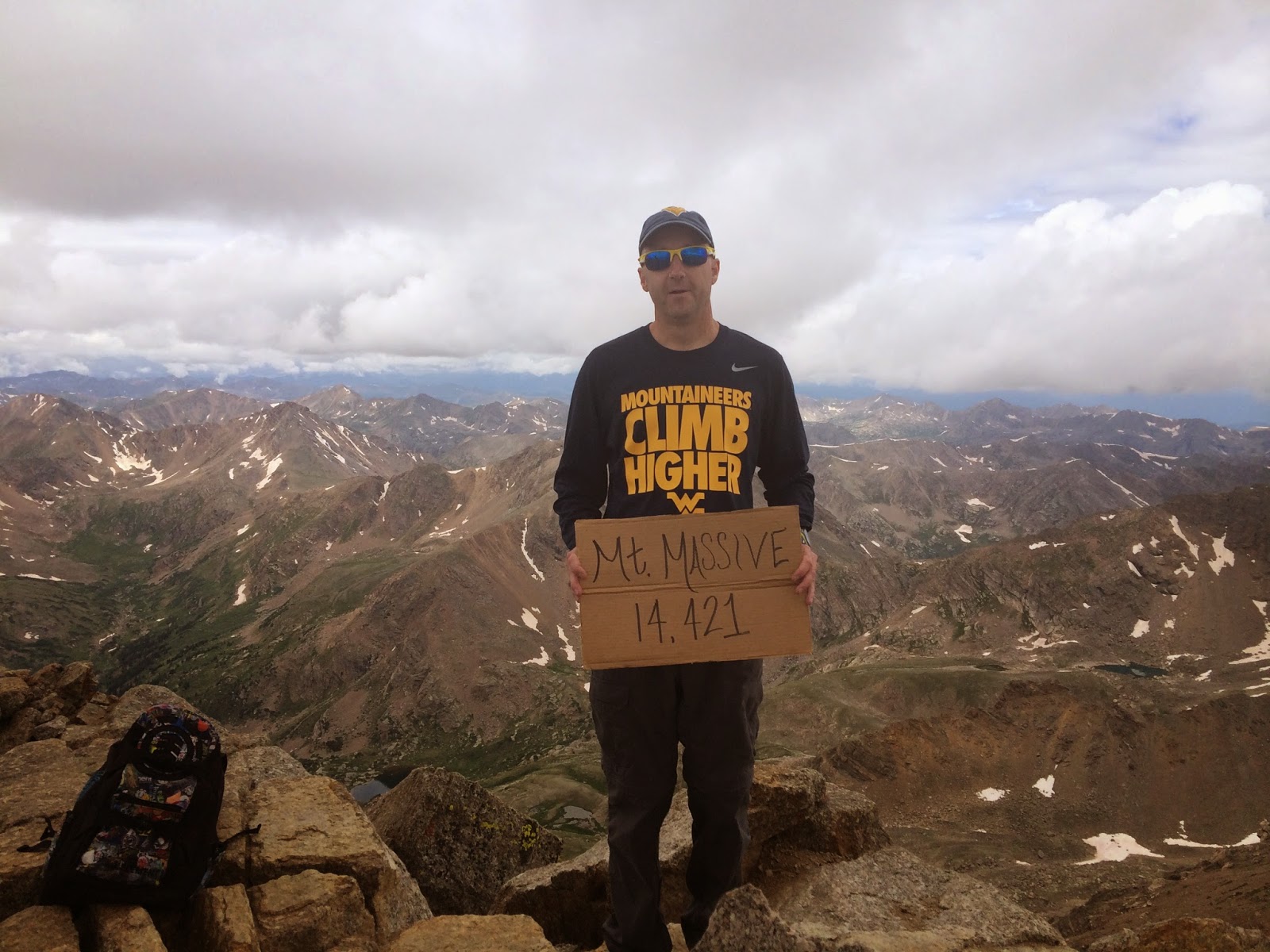 ...which reminds me, I need to update my hiking blog, it's been a couple of years.

Again, I felt great (relatively speaking) when I made it back to the vehicle. I had plans to do La Plata the following day but I figured, after back-to-back days of 12+ miles with significant elevation gain, a day of rest would serve me well. With a 5-day backpacking adventure ahead of me...I would be correct!

Stay tuned for Part 2 of Let's Get Serious.

Very cool. I can only imagine how great of an experience that would be.

Great report Chris,
I think those are the same Ptarmigan, Marmot, and Big Horns that we saw a couple of weeks earlier. Can't wait for your description of part 2.